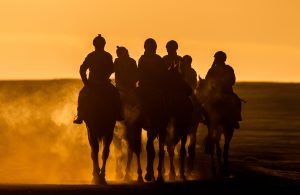 By Daletta
ARTHUR Moore’s appeal, through the letters column in The Irish Times, for the resumption of racing in this country certainly caught one’s eye. It also served as a timely reminder of the recent closure of his prep school alma mater – Headfort School, Kells, Co Meath.
Headfort has been a spawning ground for some of the leading figures in Irish racing. Jim Dreaper went there, en route to becoming Irish National Hunt trainer for the first time six years after taking over from his legendary father, Tom Dreaper in the 1970s. Prior to that, Jim had come within a neck of realising Tom’s one outstanding ambition to train a Grand National winner.
In 1971 Jim and Black Secret ran Specify to a neck in that Aintree feature. Back home Tom had sent out no less than 10 Irish National winners, seven of those in successive years, notably Prince Regent, Royal Approach, Arkle and Flyingbolt. Jim continued that Greenogue tradition, especially through Brown Lad, the one and only triple Irish National winner. Arthur Moore, at Headfort at the same time as Jim, grew up across the road from Fairyhouse and likewise upheld his family’s association with Ireland’s premier steeplechase. Dan, Arthur’s father, had ridden Revelry to success in 1947. He had also trained Revelry, as he had Golden View II, the 1946 winner. At the time professional jockeys were not permitted to hold a trainer’s licence in their own names. Hence, credit for both winners went to Dick O’Connell, Dan’s head man. Over 30 years later Dan Moore was officially credited with Irish National success as a trainer when mortally ill owner-rider Tony Robinson scored on Tied Cottage.
In the meantime Arthur, having shared the Irish amateur riders’ title with Dermot Weld in 1968, rode King’s Sprite to win it for trainer Georgie Wells in 1971. On turning to training Arthur continued the association when saddling Feathered Gale to win under Frannie Woods in 1996. More recently Arthur scored again, in 2011 with Organisedconfusion, ridden by Nina Carberry, his niece.
Jim Wilson and his brother Robin were also at Headfort in that golden age, as it seems in hindsight. An accomplished amateur rider, Jim Wilson rode former invalid Willie Wumpkins to success at three Cheltenham Festivals. Trained by Jim’s mother-in-law, Jane Pilkington, Willie Wumpkins opened his Cheltenham Festival sequence in 1979, at 25-to-1. He and Jim returned 12 months later to repeat their Coral Golden Handicap Hurdle victory, this time at 10-to-1. Incredibly, they made it a hat trick in 1981, by 12 lengths, second favourite at 13-to-2.
However, greater glory awaited Jim Wilson the following day. He was to ride Little Owl in the Cheltenham Gold Cup. Little Owl had been left to Jim and Robin by their aunt, Mrs ‘Bobbie’ Grundy. He was trained by ‘Peter’ Easterby, on a roll having won the Champion Hurdle with Sea Pigeon on the opening day.
Peter Easterby thus completed a rare and coveted double when Jim got Little Owl home ahead of stable companion Night Nurse, ridden by Jonjo O’Neill. Tim Fitzgeorge-Parker captured the scene in his ‘The Ditch On The Hill.’
“I shall always remember Jim Wilson coming in, raising his whip to heaven and thanking his aunt up there for leaving him this wonderful horse.” Jim had become the first amateur to ride a Gold Cup winner since 1947 when Dicky Black had succeeded on Fortina, the future champion National Hunt stallion.
Of the more recent alumni to emerge from Headfort School and play an active part in Irish racing, pride of place surely belongs to Charlie Swan. Subsequently apprenticed to Kevin Prendergast, Charlie became Irish champion apprentice in 1986, before rising weight dictated a change of metier and his transfer to the late Dessie Hughes.
Champion National Hunt jockey in this country for the first time in 1989, Charlie made that position his personal fiefdom until 1997, a nine-year sequence. During that period Charlie was overall Irish champion five times. The emergence of Aidan O’Brien as the most successful trainer of his time provided the base on which Charlie rode over 100 winners for six years in succession. In December 1992 riding legend Martin Molony was on hand at Thurles to congratulate Charlie on surpassing his own record for winners ridden in any calendar year, a record that had stood since 1950.
While it is sad to see the closure of Headfort School after more than 70 years, it can be proud of its contribution to Irish racing.