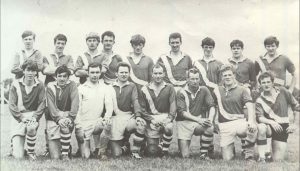 THE 1969 intermediate football final between Ballymurphy and Grange played “in treacherous conditions” in Tullow on Sunday 17 August was a close encounter.
According to The Nationalist, Fintan Ryan in the Ballymurphy goal, after conceding an early goal, made three great saves to keep his side in the game. As it turned out those saves were badly needed.
Ballymurphy were short Red Liamy Walsh, John Walsh and Eamonn Lennon and were playing a side who were looking to add the intermediate crown to the junior they had won the previous year. It was predicted there was never going to be much in it.
At one stage in the second half it looked as if the eventual winners were going to win easily when they led 2-4 to 1-2. However, a goal in the final quarter by Peter Browne ensured a tight finish before Ballymurphy held out by 2-4 to 2-3.
Ollie Hynes, who featured on the winning team, said much of the credit for the victory went to the late Aidan McGee who looked after the team.
There was no such thing as a manager at the time but McGee had a way of getting the best out of the players he was associated with.
“He looked over the team. They call them managers and trainers now but he had everything in his head. He was fair and honest with everybody.
“He was Mr Ballymurphy in every sense of the word. If I heard Aidan McGee telling a player he wasn’t playing well he never used bad language. He got his message across calmly and nicely,” recalled Ollie.
Ballymurphy: Fintan Ryan; Eddie Doran, Pat Kavanagh, Tom Redmond; Tom Foley, Christy Hynes, Tony Whelan; Cyril Hughes (0-2), Noel Carroll; Jim Byrne, Eamonn Coleman (1-0), Ollie Hynes; Danny Foley (0-2), Pete Byrne, John Fleming. Subs: James Doyle for Tom Redmond, Shem Murphy for Whelan. S Nolan (Grange, 1-0, own goal)
Grange: Liam McCutcheon; Jim Conway, PJ Kelly, Jim Stynes; Michael Griffin, Frank Nolan, JJ Murphy; Pat Murphy (0-1), Ned Doyle, Vincent Doyle (0-2), Todd Jackman, Pat Gaynor; Tom McDonald, Peter Brown (2-0) Dan Pender. Subs: Sean Hade for Pender, Mick Pender for JJ Murphy, Ollie Murray for N Doyle.
Referee: Peter Roberts (Kildavin)

BACK ROW
Mick Murphy: He was still a teenager here but subsequently went on to enjoy a long career with the Carlow senior hurling team. As a member of the Mount Leinster Rangers club he mentored and coached players for many years and still lives locally.
Shem Murphy: A brother of Mick, he subsequently moved to Galbally in Limerick. His son, Johnny, is now a top intercounty GAA referee. He came on for Tony Whelan in the final. Sadly he passed away some years ago.
Cyril Hughes: The future Carlow senior star was only 16 years of age at the time. His team-mate at the time, Ollie Hynes, recalls the teenager gave an exhibition of football that day. Cyril needs no introduction to anyone who has even the slightest connection with Carlow GAA as he went on to become one of Carlow’s greatest ever dual players at club and intercounty level.
Pat Kavanagh: When the going got tough the tough got going and Pat was a strong and very dependable defender whose timely interventions saved his team on many occasions. He played with Borris in the 1971 senior hurling final and lives in Ballyphenan now.
Danny Foley: He was very adaptable and could play anywhere. In 1969 he played up front where he picked off some vital scores at different stages of the campaign. Brother of Tom, he went on to play for Ballymurphy in goal and is now living in Glynn.
Eamonn Coleman: He had a strong presence up front playing at centre-forward in the final. He is an uncle of John Coleman who has been involved with the Mount Leinster Rangers club for many years now. He is living in Dublin.
Tom Foley: He hurled with the county for many years and was a strong and reliable defender who, after retiring from Keenan’s of Borris, lives in Ballymurphy.
Noel Carroll: The midfielder was originally from Rathanna and after a career in the defence forces he went on become a PE teacher in Ballyfermot. He lives near Naas and is very involved in voluntary work in the local community.
Tony Whelan: He was a very strong and hard-working defender who loved mixing it with his opposite number. He worked in the bank while he also played rugby in Carlow. He settled in Graiguenamanagh but passed away suddenly in 2015.

FRONT ROW
Tom Redmond: He played in the full-back line and was a very good dual player before going to America where he still lives. He is actively involved in the GAA in Chicago.
Ollie Hynes: He was a knacky forward who played with Borris in the 1971 hurling final. From the half-forward line in 1969 he went on to become a referee in Carlow. He is a retired from the Aer Corps now but is still a regular attendee at games around the county.
Fintan Ryan: His roots were very much South Carlow and he also played senior hurling with the county. When he moved to Carlow town he became involved with Carlow Town Hurling Club as a player and then served as an officer. He had his own retail business on the Staplestown Road and played golf in the local club. He passed away in 2009.
Johnny Fleming: A good handballer who went on to win many honours at provincial and national level, he served as chairman of Borris handball club for many years. He was a nippy forward who was hard to mark. He got game time with the successful Carlow junior and intermediate hurlers in the early 60s. He lives in Borris.
Christy Hynes: He was on the Carlow team which won the All-Ireland intermediate final in 1962 and also featured when Carlow beat Cork in a senior league game shortly afterwards. He is retired from Thompsons and Cunningham Engineers and is still a regular attendee at matches in Netwatch Cullen Park.
Petie Byrne: He played full-forward here but could play anywhere. In many people’s opinion he was one of the best footballers in the county. He was tragically killed in a car crash in the mid-70s.
Eddie Doran: He lives in Ballyphenan and was as tough as old boots. He could play anywhere but featured at corner-back on this team. He was a steadying influence in a tight final.
Tim Byrne: He was a brilliant dual status player and went on to win a senior hurling final with Ballinkillen in 1973. He hurled with the county for many years, has a shop in Ballinkillen and still lives locally.

The club life, through thick and thin

‘Black’ Jimmy Doyle deserves inclusion on our team of talents

Turlough believes games may not return until 2021