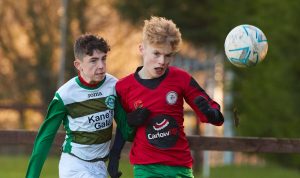 By Harry Shorthose
THE Carlow and District Juveniles League has also made the decision to cancel the rest of the 2019-2020 season.
The league had wanted to resume playing but the FAI guidelines released last week meant that it was no longer possible without impacting on the 2020-2021 season.
“We’ve gotten permission from the SFAI to start back on the first weekend of September as long as it’s a new league,” explained chairman Peter Harvey.
“We can finish the season off to the middle of October if we want, but by the rules you have to take a break as the players have to be given a month as free agents before you can resign them.
“That would mean it would be at least a month before we could play again plus another couple of weeks for clubs to register all their players. That would mean we couldn’t start the new season until the middle of November so getting next season’s league finished in time would cause us even more problems. We’re better just starting afresh.”
It follows the SFAI’s decision to cancel all of their affiliated competitions including this year’s Kennedy Cup.
Meanwhile, League of Ireland underage side Carlow-Kilkenny FC are hoping to get back to competitive action soon with a 28 August return suggested. The season would then run until the middle of December taking them right up to the start of the next National League season.
They are hoping to return to training on 10 August in line with government guidelines. However, club chairman Harvey was quick to add that this is not guaranteed and that it is dependent on the government easing Covid-19 restrictions as planned.
“We haven’t got any fixtures yet at all so it’s all still up in the air, this is just what has been suggested, nothing is guaranteed at all. The government has to worry about phase two before they can focus on planning for phase three so it’s all speculative at the moment.”

No champions of The Nationalist Premier Division this year