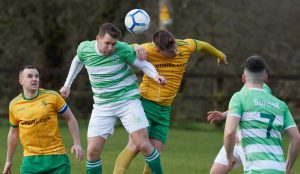 New Oak’s Craig Wall and Crettyard’s Danny Doyle in action during their clash in The Nationalist Premier Division in January
Photo: michaelorourkephotography

By Harry Shorthose
THE Carlow & District League’s decision to end the 2019-2020 season with immediate effect has been met with a mixed response.
Following discussions with clubs and the referees branch, the decision was made late last week because “as things stand it wasn’t possible to complete the season without compromising players’ health”.
A statement from the Football Association of Ireland (FAI) recently had given leagues the option to restart their season on 28 August with a deadline of 11 October for the season to end. The 2020-2021 season would then begin shortly after.
However, the Carlow league has decided it would not be feasible to start in August and instead asked clubs to focus on getting ready for the 2020-2021 season.
“Six months will have passed by the time the league would have returned in August. That would mean going straight into a new season in October and effectively asking players to play for 10 months straight which could possibly be damaging to a player’s health,” explained the Carlow League’s statement.
He added that the league would provide clubs with as much information as possible on the structure of the new season. The 2020 Over-35s season will be cancelled completely as it is played during the summer months.
Kilree Celtic will still be promoted to The Nationalist Premier Division next season having won the Division One trophy just before the Covid-19 outbreak forced the game to a standstill. Vale Wanderers will still be considered Youths Division champions having won the league before the shutdown.
It’s understood there will be an extra team in the Premier Division next season with no relegation from that division or from Division One. There will be no winner of the Premier Division or Division 2.
Crettyard United manager Patrick Brennan is among those to welcome the league’s statement.
“We’re happy to have the decision,” he said. “At least now I can tell my players to stop training. It was inevitable really, I think that possibly there was a way to finish it but I get that the only way to finish the season was to impact on next season and so it makes sense. We were on track for a clean sweep of domestic trophies [Premier Division, Premier Cup, Carlow Cup, Shield] but I totally understand the decision.
“Realistically, there were only a few clubs that were going to want to play because the rest have nothing to play for.”
However New Oak manager Brian Quigley has said more could have been done to try to finish the season.
“We think the league has rushed the decision with very little consultation with clubs,” he told The Nationalist. “They only asked us whether or not we wanted to finish the season, there were no ideas suggested, no proposals. As far as we know, the Leinster Cups are still going ahead so we have Leinster competitions but no matches to prepare for it. The way we look at it is, if the league is going to start up in October, teams are going to be looking for challenge matches all through September so why can’t we finish the season off then? Four weeks is plenty of time to finish the league.”
At the time games came to an end in March, the race for The Nationalist Premier Division was heating up nicely. Slaney Rovers were on top of the table with 23 points after 13 games played. Crettyard were just two points behind on 21 after 10 games played. New Oak were also on 21 points with a further game in hand.
“We’re disappointed,” said Quigley. “We’re unbeaten in a year and a half and we were going well. We just feel like everything is being taken away from us.”