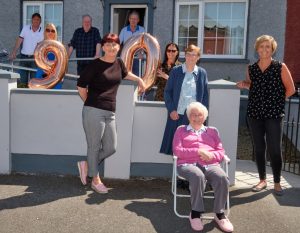 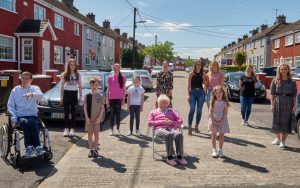 THEY sang I just called to say I love you and that was exactly what the Lacey family did when they gathered outside their mother Sheila’s house last week to wish her a very happy 90th birthday.

An absolutely delighted Sheila from JKL Avenue, Carlow came outside to discover her children, their partners, her grandchildren and her great-grandchildren, who live locally, had gathered to wish her a very happy 90th birthday.

“She absolutely loved it, she said it was better than any hotel,” smiled her daughter Eleanor Curran. “She hasn’t stopped talking about it since, it was absolutely lovely,” added Eleanor.

All at a social distance, the group sang Happy birthday to Sheila, cut the birthday cake, enjoyed a chat and were delighted to see lots of the neighbours in JKL also coming out to wish Sheila well on her milestone birthday.

“Myself and my sister Tina sang, I just called to say I love you and she loved that too,” said Eleanor.

Eight of Sheila’s ten children were able to be there. Son David is in London and son Paul in Manchester, so unfortunately they were unable to travel due to the restrictions. Shelia also has a terrific 29 grandchildren and 19 great-grandchildren, with many of those who live locally also present.

Sheila is a native of Baltinglass and was married to the late Walter ‘Bunty’ Lacey, who sadly died four years ago. The couple had 11 children ‒ sons John, Pat, Trevor, David, Paul and Walter and daughters Breda, Eleanor, Tina, Majella and Clare. Sadly, Walter sadly passed away.

When her family was reared, Sheila began working in the Seven Oaks Hotel and continued there for 20 years, where she was very well known and liked by staff and customers alike.

Following the visit from her family, there was another lovely birthday surprise for Sheila, when she received a very special message.

“My cousin Bernard Hennessy sent a WhatsApp message wishing her a happy birthday and then he said he would sing ‘Bunty’s’ favourite song Queen of the May for her. She absolutely loved that, she cried … but it was so lovely,” said Eleanor.

As the day went on, the birthday surprises for Sheila kept on coming!

“Then my uncle Lukie Lacey’s four daughters came up with balloons and everything and sang Happy birthday to her. She was delighted with that, too,” said Eleanor.

“The house is like a flower shop … there are so many bouquets from people. It was lovely for her.”