What it’s like to live… on a Covid-free island

Fiona Glynn is a teacher who’s originally from Palatine, Carlow. Two years ago, she and her family, husband Jesse and their children, moved to the island of Arranmore, Co Donegal to see what it was like and loved it so much they stayed there 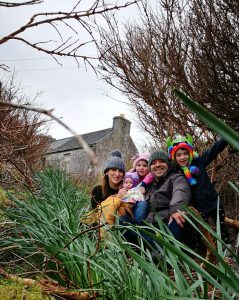 Fiona and Jesse Glynn with their children on Arranmore

‘So far, Arranmore is Covid-free’

WE moved here two years ago, when I was pregnant with our third child. We decided that we wanted a change of pace, especially with having three children. My parents Gránia, a retired teacher who taught in Scoil Mhuire gan Smál in Carlow, and Mike, who was a lecturer in IT Carlow live here, too.

We decided to move here during my maternity leave to see what it was like. It just worked out for us.

My husband Jesse is a graphic designer who was on an ad on television for the 3 phone company. A few versions were made, but I’m not familiar with them because we don’t have a television.

About 450 people live on the island, but during the summer when the Gaeltacht college is open, that could rise to about 2,000.

I work in promoting the Irish language on Arranmore and I’m employed by Údarás na Gaeltachta. When we were growing up, our parents only spoke Irish to us at home.

Our children are Róise, who’s aged seven-and-a-half, five-year-old Síomha, and our baby Fiadh is a year-and-a-half.

Home schooling? Some days you can get a lot of schoolwork done, but plans have to be flexible. Yesterday they went kayaking and the dolphins were out, so that was lovely.

We’re so lucky to have this. Our local community centre is run like a co-op and they run lots of activities such as sailing, kayaking, rock climbing, pilates, yoga, scouts, beekeeping and a kids’ club.

So far, Arranmore is Covid-free. As an island, we had a meeting the day before the schools were shut. As a community, we decided among ourselves to have our own lockdown. We put rules into play straight away, like we’d order from the mainland and get what we need delivered. That way, no-one had to leave and the shops on the island are well-stocked, too. They’re the type of place where you can buy anything from cat food and firelighters to glasses and random other things.

The summer is what keeps us ticking over and this year was building up to be the busiest summer ever for us. That’s all gone now, but everyone agrees that it’s not worth taking risks and that we should do whatever we can, even if it’s to save one person from getting it.

We’re fully regulated (following the national Covid lockdown rules), so now we can have some outdoor activities like kayaking and sailing. We’re still getting a huge amount of deliveries onto the island, though.

Will we stay here? We’re renovating a cottage and we love it here, so it makes sense for us to stay. Arranmore has always been home to us.

Woman who drove over body on roadway gets suspended jail sentence