By Harry Shorthose
CARLOW’S Shane Walsh was runner-up in the Virtual Darts All-Ireland singles tournament on Saturday from the comfort of his own home. The Bilboa man was one of two representatives from Carlow to qualify for the tournament, alongside Palatine’s Paddy Cullen, and threw some great darts to make it all the way to the final. 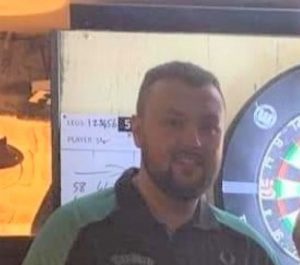 “To come second in the country out of 512 people is the biggest achievement of my life in darts,” Walsh told The Nationalist.
“I was honestly only aiming to get past the first round, I wasn’t expecting as much as I did. I was very happy overall. I knew though that I could throw to that standard and beat the bigger players, it’s just all about being confident on the night.”
After getting through the first two rounds unscathed, he faced Paddy Cullen’s conqueror from the first round and again came out with flying colours, winning comfortably.
In the quarter-final, he faced a professional player from Northern Ireland, Kyle McKinstry who is ranked 92 in the world.
“He’s probably one of the best throwers in Northern Ireland. I was delighted to get a game against him. He was beating me 6-3 in a first to seven with just about a 100 average and I kind of thought the game was over. I fought back though to beat him. That was the highlight of my night, to beat a professional player. It really gave me a confidence boost.”
He won his semi-final with ease and moved into the final where he faced Chris Gilliland from Northern Ireland. “He was very impressive all night and beat Gavin Carlin in his semi-final (another professional darts player) so I knew I had a tough battle ahead of me. I was happy enough with how I was throwing and how I’d been doing so I wasn’t really nervous. Things just didn’t go my way, I didn’t hit the big scores at the right time but I was still happy with my achievement.”
Walsh is hoping this will give him the confidence to push on and earn a place on the Irish team, perhaps attempting to win a professional tour card at qualifying school.
Paddy Cullen also represented Carlow and was unlucky not to make it past the first round.
Meanwhile, the Carlow Darts intercounty team has been keeping themselves active thanks to a new initiative from the Junior Darts Corporation (JDC). They have launched a new online tournament allowing players to play at home with the chance to play in the finals in Gibraltar when the Covid-19 restrictions are lifted.
“We’re lucky in a sense that darts can be played in a house and that we can still play,” explained intercounty team member, Paddy Cullen. “We’re playing different online tournaments. We use the messenger phone app and there’s a scoring app you can download too. You go through the system, get your grades and you go up through the ranks. Because we are doing it virtually, we have to record our score on facebook live and leave it up for 24 hours so that they can verify it. It’s all done via godartspro.com where you enter your score.
“It’s keeping us all moving anyway,” says Paddy.
“It’s not ideal but at least we’re getting to play some darts and keep the arm going. There’s no indication yet as to when darts can be back, it’s going to be very difficult to maintain social distancing so we will have to see what way it can work.”