IT Carlow leads the way at Student Sport awards

IT Carlow has been named the top performing institute of technology in the country for sports at this year’s Student Sport Ireland (SSI) Sports College of the Year Awards.

The sports which count towards the awards programme include Gaelic football and hurling, soccer, rugby, basketball, pool, netball, volleyball and badminton.

It’s the second year in a row IT Carlow has been named the top-ranked institute of technology in Ireland. It comes after an academic year which saw many competitions truncated due to the Covid-19 pandemic, however, IT Carlow had already excelled in many sports. 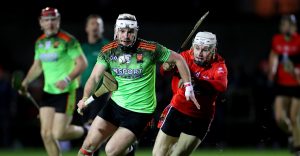 Chris Nolan of IT Carlow and Mount Leinster Rangers in action against UCC during the Fitzgibbon Cup final in February Photo: Inpho

“We were delighted to hear the news that, for the second year in a row, Institute of Technology Carlow ranked first amongst all the other institutes of technology,” said IT Carlow director of sport Donal McNally. “It is particularly gratifying when we take into account that several of the sports IT Carlow was very successful in this year – athletics, camogie, archery and boxing – are not currently considered in the overall points programme.”

IT Carlow reached the finals of the Fitzgibbon and Sigerson Cups this year while other highlights include the men’s soccer squad winning the CFAI Perpetual Cup, the men’s rugby team winning the SSI Division 1 league and the SSI U20 O’Boyle Shield, while the pool team became the UPC Irish Intervarsity Eight-ball Pool Championship winners.

“This ranking, for the second year in a row, is a great testament to the outstanding sports facilities and opportunities at IT Carlow and the fantastic engagement of our students across all sports disciplines. I congratulate students and our sporting faculty on this achievement,” she said.

The top-ranked college in Ireland overall was Dublin City University after a year in which they won the Sigerson Cup for Gaelic football, soccer’s Collingwood Cup and the Women’s Division 1 basketball title.

Filed under: IT Carlow

IT Carlow in top five performing universities in Ireland