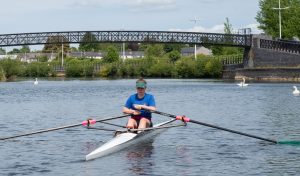 By John Foley
THE beginning of a return to normality for sportspeople was slow but welcome last week and among those first sports to venture out was rowing.
Carlow Rowing Club members were back on the Barrow, albeit in restricted fashion.

“We can only have scullers who live within five kilometres of the club,”says club coach Kathryn Wall. “We have no crew boats out yet and we can only gather in groups of four: one coach with three athletes. They have to be able to lift the boat out themselves and we have no access to the clubhouse yet.” 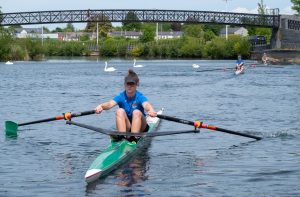 Gliding on the water

It’s a case of the club taking small steps forward, but the relief for those scullers who are in a position to make it to the river is tangible.
“They would have taken anything just to get out,” says Kathryn. “It feels a bit strange because you come down and you go straight out. Afterwards you have to go home because 15 minutes after you there are three more in the river and you can’t wait around to have a chat. But they’re sticking to the rules and they’re very grateful to be out.”
We would normally be approaching one of the most anticipated weekends of the year; the Carlow club hosts their annual regatta each June Bank Holiday weekend. The Barrow won’t be its usual hive of activity, but it comes as no surprise that the club is not allowing the date to pass unmarked. 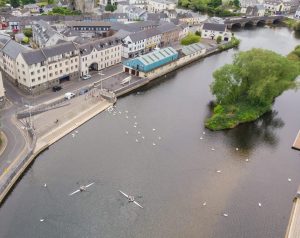 “We’re holding a virtual regatta on Bank Holiday Saturday,” says Kathryn. “We decided we had to mark it with something. So we have a competition for teams of three and an individual competition in running, cycling and on the rowing machine for under-14s, 16s, 18s, senior and masters categories, women and men.”
Rowers from Muckross in Killarney, New Ross, Neptune and many more are set to take part.
“We expect to have a big number participating,” says Kathryn. “We just want to be able to look back and say we marked the event. We have our medals sorted, ‘Virtual Regatta 2020’.” 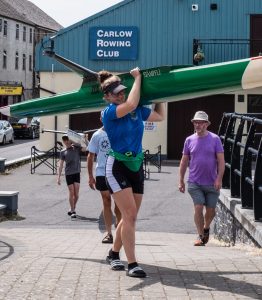 Eleanor Feeney heads for the river

The rest of the summer is still something of an unknown quantity for Irish rowers. The Irish Championships have provisionally moved to September but they may yet be called off. The alternative is a series of Festivals of Rowing taking place around the provinces later in the year.
In the meantime, club members who live further than five kilometres from the club are eagerly awaiting the next phase of the easing of restrictions on movement which will allow travel of up to 20km.
However, it’s likely training will still be limited to single sculls.
“You can’t physically distance in a boat,” says Kathryn. “There just isn’t enough room. So we’re not really sure when we will be able to get crews back out on the water. You have the slip stream effect. It’s the same with cyclists and athletes in groups. People are affected by other people around them in close proximity. So we’re waiting for advice on that. There is a high level group which is reviewing the return-to-sport protocols.” 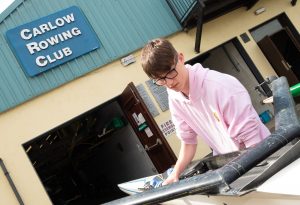 Kathryn says the spirit in the club has been good despite the difficulties of recent months.
“The older kids have trained every day,” she says. “After a couple of weeks they were talking about what they would do. And one of them said, ‘Well, what do we always do, we train!’ So they kept going and we haven’t lost anyone which is great.”
It’s a work ethic which has served them well down through the years. Pandemic or not, that won’t change.