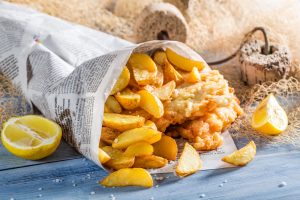 Homemade fish and chips in newspaper

Italians have been in Ireland since the 1800s and would eventually establish that staple of Irish life, the chip shop. But have you ever wondered where fish and chips came from and why Italians chose this small island as a location for their business? Stefano Marsella has the inside story – with extra vinegar, of course

FISH AND chips is an English dish – but where did it begin? Well, chips where originally meant as a replacement for fish when rivers froze over during the winter. Housewives would carve potatoes into the shape of fish and fry them as an alternative. Before the idea of fish and chips came about, non-battered, fried fish were sold on the streets with other types of food, such as bread or baked potatoes, on a wooden crate hung around a street seller’s neck.

Then a man by the name of John Lee had the idea of selling fish and chips together, and it clearly caught on. People liked the idea of fish and chips because, at the time, working class diets where bland and didn’t have much flavour or variety. It would go on to become a firm favourite among the English. People began to love the hearty, warm, flavoursome dish.

It’s claimed that the first chipper was opened by a Jewish man by the name of Joseph Malin in East London around 1860. The Italian immigrants of the time saw the lengthy queues and this successful business model started popping up everywhere.

Why did Italians decide to start business, or more specifically, chippers, here in Ireland? Well, according to Peter Borza of the Irish Traditional Italian Chipper Association (ITICA): “Italians started arriving in Ireland in the 1880s as artisans and stone masons. They worked on Georgian Dublin and big houses around Ireland.” So Italians have been here for quite a while. One of the reasons Italian families decided to come to Ireland was because it was a family-based Catholic country, similar to Italy in that regard.

Most of the Italian community in Ireland came from the Val Di Comino area in Italy. Parents sectioned off land for their children. As generations moved on, the land that was left was of poor quality and not good for agriculture. In order to make a decent living, they had to move abroad,

“My parents moved to Ireland when I was two month’s old,” says Onorio from Mario’s Takeaway in Graiguecullen.

THE LEGEND OF GIUSEPPE CERVI

How did chippers reach Ireland? There is a legend that in the 1880s there was one Italian man by the name of Giuseppe Cervi who was on a ship going to America, but he got off in Cobh (then known as Queenstown) and made his way up to Dublin. He worked in Dublin as a labourer with intentions to buy a coal-fired cooker and a handcart to sell roasted chestnuts on the streets of Dublin.

One day he was roasting chestnuts and somehow accidently roasted a potato. He soon realised that the Irish knew the taste of a good potato. This inspired Giuseppe to open Ireland’s first chipper on Great Brunswick Street (now Pearse Street) beside Trinity College.

He ran the shop with his wife Palma and because of their lack of English they created a phrase that is still in use today. When a customer arrived at the cashier to pay for the food, Signora Celvi would ask in Italian while pointing at the menu “Uno di questo, uno di quello?” Which translated into English as “One of these, one of those?”

This phrase got shortened to “one and one” so nowadays if you ever walk into an Italian chipper and ask for a one and one you will get a fish and chips. By 1909, there were 20 fish and chip shops in Dublin serving a population of 290,000 people.

According to Peter Borza, “it was not an instant hit”. By the 1930s, there were only 50 fish and chip shops in Ireland. It wasn’t until after World War II that fish and chips started to get really popular. Fish and chips were one of the only foods not rationed during that war and this tasty dish became a working-class staple.

Giovanni Borza, who is the president of Club Italiano, mentioned that “at first there was only fish and chips on the menu, but as the years went on other items were added”. Now you might well find over 100 items on a chipper menu.

Giovanni’s great-grandfather opened a chip shop here in Ireland in 1898.

Before the 1900s, fish and chips were not very popular in Ireland. According to the documentary ***Chippers: the story of the Italian community in Ireland***, Italians would sell ice-cream during the summer and roasted chestnuts during the winter to make money. The Italians brought fish and chips from England and popularised it among the Irish.

Every year in southern Italy, in one of the small towns in the Val Di Comino area, Casalattico, there is a festival that celebrates the Irish side of our heritage called ‘The Irish Fest’, with Irish music, the Irish flag, beer, bars, crêpes and, of course, fish and chips. Everybody gathers to celebrate this wonderful, lively event.

In ***Chippers: the story of the Italian community in Ireland***, Angelino explains how in 1915 his mother went over to Ireland to help her brother in the shop. Two weeks before the 1916 Easter Rising, Angelino himself, then aged 13, arrived in Dublin to join his mother and uncle.

He says that he would go out to the harbour at six o’clock in the morning and wait for the boats to come in and unload the fresh fish. The fishermen would throw them on to the wharf and he would have to go among the fresh fish while they were still flapping around and hand-pick the ones he wanted. They all had to be the same size and put into a box. He then brought them back to the shop and started working on them; it was an all-day job.

A lot of Italians migrated to Ireland in the 1940s because of World War II. The 1950s saw most of the Italian chippers open around the country. After this, you no longer had to be in Dublin to get fish and chips. Onorio’s grandfather opened his chipper on The Quays in Dublin in the late 1950s.

The Italians would not have much of a social life in the evenings at the time; while the Irish were in the pubs socialising, the Italians were working to prepare for the influx of customers. This meant they had very little contact with Irish people. Which, according to Breen Reynolds of the Department of Geography in Trinity College, Dublin, is one of the reasons why the Italian community remained so unintegrated for so long. The two communities eventually started to mix.

As Giovanni Borza said: “We were very close and had similar traditions and values.”.

As of now there are over 200 chippers across Ireland, so you could say that chippers have become a permanent part of Irish culture. Onorio added: “The two communities continued to mix as the years went on – my wife is Irish.”

There is some confusion when the question is asked, “Are you Italian or Irish?” Some Italians feel like they are both Irish and Italian because some of them have lived in Ireland their whole life and make their living here but were born into an Italian family, Giovanni feels that he is both Irish and Italian, but more Italian, while others have moved over from Italy and feel they are 100% Italian and have created a new life in Ireland.

Onorio says: “I was taught English in school, but we spoke Italian at home. I grew up with the old-fashioned Italian traditions.”

Most Italian households in Ireland tried to keep the Italian traditions going so their kids would know about their Italian culture alongside their Irish culture. “I go to Italy for holidays, but wouldn’t move back to Italy because I have built a life here in Ireland,” commented Onorio.

Many people are aware of the national holiday in May, known as ‘National Fish and Chips Day’, where chippers sell fish and chips half price for a full day. If you ever go to a chipper on National Fish and Chips Day, you will experience the lively atmosphere while waiting in the long queue that extends out the door, “It’s my favourite day of the year. Prepping for it is hard work and the line goes out the door from morning to night,” said Onorio.

Finally, I’d like to say that running a fish and chip shop is not conducive to having a social life because it’s all about the work. I know, because I was brought up in one. The hours are very long, and the staff stand on their feet all day.

Nowadays, chippers have to compete with huge fast-food chains. Customers have become accustomed to getting pre-cooked food in minutes and they expect the same from their local chipper. It’s a more complicated feat nowadays, but they still use the old traditional ingredients with a lot of the old tried and tested methods.

And they very much enjoy their position in the community. They tend to know a lot of people in their town or village by their first name and what their order will be before they get in the door. The Italians have integrated very well and feel very Irish themselves (yes, I am Irish, and I am Italian). We love the banter that goes on across the counter between us and the customer.

In this day and age, it is comforting to know that some traditions are still going strong and that you can be transported back to your childhood with a simple whiff of fresh chips drenched in salt and vinegar. When this dreary time is over, I for one will be making a beeline for my local chipper because the Irish chipper is more than just a takeaway; it is ingrained in our memories – and our waistlines!

A fortnight without any new Covid cases