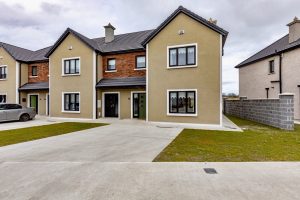 The house at Castle Oaks, Carlow, which was won on Saturday

By John Foley
CARLOW GAA says all tickets were accounted for and included in last Saturday’s draw for a three-bedroom house at Castle Oaks in Carlow.
The draw which took place at Netwatch Cullen Park was streamed on Facebook live. However questions were immediately raised by online viewers when it appeared one ticket was left in the box after they had been transferred into the drum by independent observer Tony Harney of Harney Nolan Accountants,
Speaking to The Nationalist on Monday, Carlow GAA chairman Sean Campion said the draw was held in a fair manner.
“There wasn’t a ticket left in the box,” he said. “It was a receipt of a ticket that was paid for by card in the office. Our independent observer Tony Harney verified our tickets and they were with Tony until he put the box on the table on Saturday. He transferred the tickets from the box into the drum and checked the box. He will stand over that, there was no ticket in the box.”
The winning ticket, pulled out of the drum by Bishop Denis Nulty, was bought by Kilkenny man Kevin Alyward. The Mullinavat man, who wins the house worth €250,000, had purchased his ticket online.
A total of 3,550 tickets were in the drum, including a number of free tickets which were distributed to clubs as part of the fundraising drive.
Saturday’s draw brings to an end an almost eight-month wait from the date the draw had originally been fixed.
Due to slow ticket sales, the draw was pushed back from October of last year to Christmas week, then New Year’s Eve, then Easter weekend as clubs around the county were asked to make a sustained effort to sell enough tickets to make the draw viable.
It had initially been hoped that Carlow GAA would cap ticket sales at 8,000.
“It was important to hold the draw and get it off the table at this stage,” Campion said. “I want to take this opportunity to congratulate Kevin Aylward on winning the house. We spoke with him after the draw on Saturday and he was over the moon.”