Daletta: Ascot was once derailed by the trains 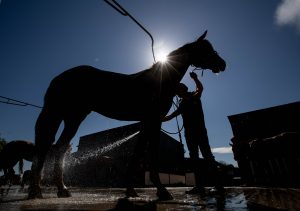 THE Ascot authorities’ decision that the royal meeting should be staged on its original dates, commencing on 16 June, has upset many. Eddie O’Leary, never one to mince his words, has been to the forefront, as quoted in The Irish Times.
“In an ideal world, the BHA, HRI, should move everything back a month. What’s wrong with that? It’s an exceptional year and I feel everything has to move to get around an exceptional year. Give horses a chance, give trainers a chance, give owners a chance, give everybody a chance.
“Personally, for the life of me, I can’t see why they can’t move every single thing back a month, including the sales. Everything would slot into its own place. The pattern would run out exactly as it should be and the pattern would work.
“I can’t for the life of me understand why Ascot isn’t put back a month or six weeks, especially as it’s behind closed doors so who cares. But they’ll have it now before racing even starts nearly, which is sad.
“Seemingly it can’t be changed unless by royal decree: would nobody ask the good lady. She’s a sure one to help! It has been moved before for a train strike. Surely a pandemic is more serious than a train strike. But they seem absolutely determined.”
The year of that train strike was 1955, when the royal meeting, scheduled to take place 14-17 June, was deferred to 12-15 July. Dorothy Laird recounted events in her book Royal Ascot.
‘On Gold Cup day 1955, on the altered date of Thursday, July 14th, there was a devastating Ascot thunderstorm. Just after four o’clock, when the King George VI Stakes had just been won by Prince Barle ridden by Manny Mercer, a violent storm broke out.
‘A vivid flash of lightning travelled the length of the straight opposite the Royal Box, appeared to contact the wire fencing surrounding the bookmakers’ enclosures on the far side, and scores of people near the fencing were struck to the ground,’ Sporting Life reported.
‘It was a wicked flash of lightning, which struck into the closely packed crowd and scattered them like a pack of cards,’ said Mr AJ Harvey, a gateman close by. One young woman, Mrs Barbara Batt from Reading [pregnant with her first child] was killed on the spot, and Mr Leonard Tingle of Sheffield [an evangelist] died in hospital next day. The injured, including an AA patrol man who was struck while patrolling the road outside the racecourse, were taken to King Edward VII Hospital in Windsor. The Duke of Norfolk at once informed the Queen, who was on an official tour abroad, and she sent a message of sympathy to the bereaved.
‘After an interval of an hour one more race (the Ribblesdale Stakes, won by Ark Royal ridden by Doug Smith) was run, but the rest of the card was postponed; the Bessborough Stakes to the Friday and the Rous Memorial Stakes to the Saturday.’
Richard Onslow, in his ‘Royal Ascot,’ gave a different perspective to that 1955 fixture. He related how the Ascot authorities had aspired to lay out a straight mile course as early as 1895, when Lord Ribblesdale had been Master of the Buckhounds. His term of office ended shortly afterwards and the issue was dropped. In the 1930s it was raised again, by Lord Hamilton of Dalzell, then the King’s Representative at Ascot, only to be dropped with the outbreak of World War Two. It had become a case of third time lucky when the Duke of Norfolk brought that straight mile to reality in time for the 1955 renewal.
‘As it happened there was more time in which the work could have been carried out than was supposed. In this day and age [1990], when the majority of racegoers come to Ascot along the motorway and trunk roads, and the runners are transported in horseboxes, it may seem strange that as recently as 1955 the success of a major meeting was dependent on the railways. Consequently when there was a railway strike during the early part of 1955, the Royal Meeting had to be postponed for a month.’
Sean Magee found some compensation. ‘On the other hand, there was good news in 1955… when the prohibition of divorcées from the Royal Enclosure was lifted… anyone could apply for a voucher, anyone except undischarged bankrupts, defaulters in betting, and those who had served a prison sentence.”