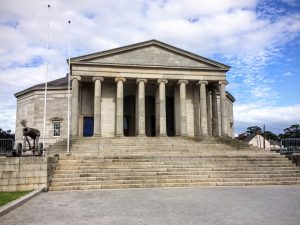 A DISTRICT court judge refused to accept jurisdiction in a domestic violence case after hearing that a woman was left with double vision and internal bleeding following an alleged assault. A Carlow man aged in his 20s appeared before the local district court charged with breaching a safety order, assault, criminal damage and making a threat to kill at a location in Bagenalstown on 19 April last.

The matter had been directed for summary disposal in the district court, but Judge Geraldine Carthy refused jurisdiction after hearing an outline of the facts.

Garda Shannon Jordan said the injured party alleged that the defendant had assaulted her. The woman had suffered double vision and internal bleeding following the alleged assault. Garda Jordan said the woman also alleged that she had been threatened with a fishing knife.

Defending solicitor Chris Hogan said that no medical report had been produced in court and urged the judge to reconsider. Mr Hogan said he had seen a photo of the injuries, which had shown a black eye.

However, Judge Carthy said she was satisfied to refer the matter to a higher court. The case was adjourned until today, Tuesday 9 June, for the office of the director of public prosecutions to reconsider its directions.

The identity of the defendant cannot be disclosed as the case was heard ‘in camera’.