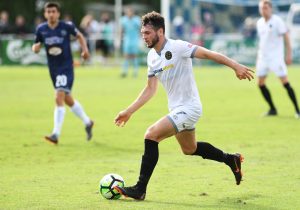 PROFESSIONAL soccer is slowly returning across Europe following the Covid-19 outbreak. The Bundesliga was quick out of the blocks while La Liga is due back this week with the Premier League set to return on 17 June.

Of local interest was the return of the Polish second division last week with Rathvilly native Eric Molloy among the first Irish men to play professional soccer after Covid-19.

Molloy came off the bench after 60 minutes as his club Stomil Olsztyn drew 0-0 in their first game back.

“I was disappointed not to start as I really thought I’d been going well,” Eric told The Nationalist at the weekend. “I did well when I came on though, was involved in three chances and was probably a wrong decision away from scoring. It [playing behind closed doors with no fans] was strange. You play the game not just because you enjoy it but because you want to entertain people and perform for them,” he said.

“They are taking all the necessary precautions, we had a two-week period of isolation before being allowed back to train, we are being tested regularly and we have to fill out a temperature sheet every day. If there are any symptoms or the temperature rises too high, we have to sit it out.”

It has been a frustrating start to life in Poland for the 27-year-old who admitted before Christmas that he was struggling to finish chances off as he had yet to score in his first 10 games. He returned to Poland in January for mid pre-season training, following Christmas at home, hoping to turn his fortunes around.

However, upon his return, he found the training intense and sustained muscle injuries that forced him out of the first two games back.

“We trained nearly every single day, minimum three times a day, I’ve never done that before, never done that amount of training in my life. I didn’t know how to handle it and it took its toll on me. I probably gave 100% in each session and looking back you would have noticed some of the older guys being clever, not exerting themselves as much. I didn’t understand because of the language barrier that some of the sessions were a lot easier and I was still putting in a lot of work.”

Then Covid hit, and the season was postponed. For most sportspeople, lockdown has been difficult and frustrating but the former IT Carlow sports science student admits that it actually benefited him.

“It came at a great time for me because I got a good rest. I was feeling fresh. I started doing my own training here in the apartment. I was working on that and became very strong and felt good. It allowed me to reflect on what I was doing. I had more time to recover so I tested myself with different training because I wanted to figure out what was making me so fatigued. I used the time to research different things and changed my diet as well, went a lot more plant based.

“I haven’t eaten meat in three months now. I’ve seen a few changes which are positive, it was a bit difficult to start with but I added little rituals that I was doing during quarantine into my full time training and it’s all helping me improve and get better.”

He says his studies have been a great help to him in his career.

“Because of my IT Carlow background, I understand strength and conditioning and what I should be doing. I actually enjoyed the quarantine period, it was good to get some down time, everyone was asking me was I lonely and I was like, ‘I feel great!’”

However, Molloy admits that some aspects of being abroad during lockdown were hard.

“I missed the family, I was speaking to them two or three times a week but it felt like I was missing out on what they were doing. I was in the apartment by myself and didn’t see anyone and because I’m in Poland, I barely get to speak English so I barely got to hear the sound of my own voice.

“The first few weeks were hard because I like to express myself and get my point across and that takes a few words. The only person I saw was a Japanese team-mate who lives near me and he speaks OK English. There were a lot of team-mates who I enjoyed being around and they were almost out of my life for five weeks, I was only talking to them on the phone but it’s not the same.”

But with lockdown easing, Molloy is flying in training and the coaches are impressed with him. It’s an opportunity to kick on from here, make his mark and score some goals in the months ahead.