What we won’t miss about the 2020 championships 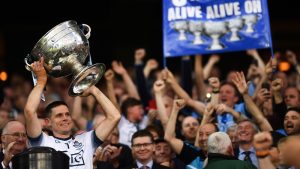 It is long past its sell by date and it would bring relief if there was no Leinster championship in 2020.

Dublin have won the Delaney Cup 58 times, winning 14 out of the last 15 championships. The other 11 counties have given up the chase and thrown in the towel at this stage.

The Leinster championship become a big yawn, even preventing weaker counties from gaining home advantage against Dublin which would have generated much-needed revenue for that county.

Since 2005, the only year Dublin didn’t appear in the final was in 2010 when Meath robbed Louth.

Down south, Kerry’s stranglehold on the Munster championship has also become boring.

Supporters and the media deserve better than managers picking dummy teams, trying to outsmart their opponents when the dogs in the street know the team listed on the match day programme is about as accurate as Donald Trump’s take on Covid-19.

Supporters who have already forked out hard-earned cash for fuel, food and tickets pick up their match programme only to discover that it makes no sense at all. Unless they get the changes over the PA system, the game will be well underway before they discover the correct lineouts.

When will managers show the courage to name a team, stick with it and say this is my hand of cards — beat it if you can?

The frustration of managers and players coming out before and after games saying nothing other than waffling about the “process” and “sticking to the gameplan”.

Wouldn’t it be wonderful if players who, after displaying great intelligence on the field, were allowed to express their own feelings on how the match went, dissecting it with honestly and integrity?

Instead players and managers of the top counties are coming out, when facing a team from Division Three or Four, saying that they respect every opposition as they had a mighty league campaign (winning maybe two games). Then they go on to tell the nation that their opponents will be tough to beat.

What they should be saying is that we are a Division One team aiming to win an All-Ireland and it would be a massive shock if we fail to win —that would be showing respect, and telling the truth.

The football pundits are mostly to blame as Pat Spillane, Colm O’Rourke and former RTE pundit Joe Brolly often make a laugh of some counties’ displays. The panel appears to judge all teams on the same standards set by Dublin or Kerry.

It is a load of nonsense and unfair on teams trying to do their best with the players, resources and financial clout they have at their disposal.

The hurling boys are not blameless either, showing signs of weakness when they fail to nail “over the top” tackles which have crept into the game in recent years. Instead the usual crap about it being “a man’s game” is being dished out by hurling experts who completely dismiss the idea of a black card in their game. They know that if it was introduced, many players would be sent for an early shower.

Hurling is a wonderful game but it has become dirty as players know they will get away with it.

The ball/sliothar is hardly thrown in when the keyboard critics are up and running with their negative reaction to players and management.

Social media has become alive with disgusting comments. The majority of them are faceless and those who post them are not strong enough to put their names to it.

Players are only human. They have mothers, fathers, siblings, wives, girlfriends, partners and children reading this rubbish.

Thankfully, I am not a genius on technology but, in my opinion, if someone puts up a vile comment they should be named and shamed or, better still, prosecuted — that would nip it in the bud.

Abuse from the stands and terraces towards players from supporters has also become too common.

The game is gone mad with over-analysis. Players are looked upon as robots — what distance they cover during games — while backroom teams are growing like mushrooms, getting bigger by the week.

Players are finding that more and more information is being flung at them from all angles. Meanwhile fans at home are mesmerised by all the data and stats in front of them.

The game has become too complicated and over-analysed. Everyone appears to have forgotten that the team that scores the most usually wins.

At the top end in both football and hurling, professionalism had crept into the game. I hope I’m wrong but with all this working remotely from home, will the GAA’s expert analysts have gone into overdrive, having discovered new packages ready to bamboozle the country?

Unfortunately injuries occur to senior intercounty footballers and hurlers, with many requiring long-term lay-offs from work and the game.

Once players step onto the pitch, there is always the chance of picking up an injury because of the courage they’re showing going into battle. They end up contesting every tackle with the heart of a lion.

There is no worse sight than a player leaving the field on a stretcher, knowing he has just received a serious injury. It also has serious repercussions for their clubs as one of their top players will miss the local championships.

In most cases, the match officials become the fall guy for teams’ defeats. The easy option is to blame the referee rather than focus on their own team’s poor performance.

Referees have a tough job because of the physical and mental demands of the game, the speed and intensity of the matches, the conditioning of the players and the pressure managers are under — a couple of poor decisions could cost someone their job.

The interpretation of the black card in football would have been very interesting this summer.

I won’t miss low-scoring games dominated by blanket defences when the two teams decide to have a game of basketball, turning supporters away from the game.

Some of matches scheduled in the Ulster championship won’t be missed as they had all the ingredients of being totally negative with the mentality “not to lose at all costs”.