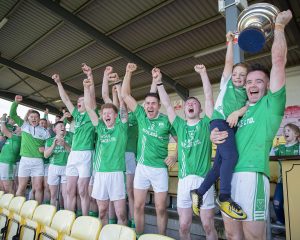 By Kieran Murphy and Michael Tracey

A county committee meeting will take place by video link on Tuesday night where club delegates will be asked to ratify the proposals for running off this year’s club championships.

That will leave room for a slightly shortened version of the football championships. There will be no quarter-finals in the senior, intermediate and junior A and B grades. The football championships will commence on 11 September. The finals of these competitions will throw in on the weekend of 9 October. It is proposed that there will be no promotion or relegation in any of the competitions.

Earlier in the year it looked as if there would be little, if any, GAA competitions at either club or intercounty level. Now players and supporters can look forward to some form of club action which didn’t seem possible not so long ago.

Carlow fixtures secretary John McDonald stressed club delegates will have the final say on the structure of the club championship but he is also aware anything can happen at national level which would change matters.

“From a health point of view no-one can say for certain how things are going to develop,” he said.

“The personal welfare of the players is paramount. We are taking it cautiously. We will move slowly and will be guided by what happens at national level.”

The return to action was welcomed by Carlow and Éire Óg footballer Sean Gannon.

“The break was needed and I’m glad of it as such. But it’s nice going back to play football.”

However, the return to an intense period of club action after several months break raises the prospect of injuries.

Gannon noted in the Bundesliga, Germany’s premier soccer league, that injuries were up 300% since its return to action despite its elite coaching standards.

“As a group of amateurs, playing every week with two training sessions in, I think winning could be down to the team that will manage their injuries the best,” said Gannon.

The fitness levels of club players starting back would also likely vary and pose a coaching challenge.

“Never mind different teams, in the one team you are going to have three or four different (fitness) stages where people will be at,” he said. “That’s going to be difficult to coach.”

Senior and Intermediate as per original draws with the junior divided into two groups of five.

Senior, Intermediate, Junior A and B as previously drawn.