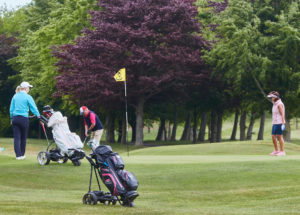 By Kieran Murphy
CARLOW Golf Club’s return to golf procedures have proved to be a huge success with almost 7,000 nine-hole rounds of golf taking place on their two courses in the first three weeks after the lockdown restrictions were first eased – between 18 May and 7 June.
When the club got the go ahead from the golfing unions, the committee decided members could play one nine-hole round of golf per day on either one of their two courses. The format proved to be an outstanding success with huge numbers in the first three-week period increasing further still since then. Indeed, 7,407 nine-hole rounds had been completed on the Deerpark course up to close of play on Tuesday of last week. Another 1,312 rounds had been played on the Oak Park Course. Over the four weeks, 73 volunteers assumed the role of starter.
From Friday up to Sunday last, members were allowed to play one 18-hole round on the main course over the three days. Depending on availability they could then play nine hole rounds on the two courses.
“Many members were aching to play 18 holes of golf so we did the best we could to accommodate everyone,” explained John Brophy, club captain.
The take-up was huge once more and from Wednesday to Sunday 738 rounds were completed on the bigger course with 176 games accounted for on the Oak Park facility.
John was glad to see a surge of interest in the game over the previous four weeks.
“People really missed their golf during the lockdown. Maybe they have a new appreciation for the game now. With the weather so good and the course in such great condition I think people bought into the ‘return to golf’,” the club captain said.
“We have had a massive level of compliance to everything we have asked people to do in terms of signing in, booking online and observing social distances. Once we got that right from the start it was embedded in so hopefully when we get to phase 3 we can start to ease off on the marshalling as people get used to the system and the set-up.”
The club has not hosted any competitions yet and, with the clubhouse closed, members were asked to leave as soon as they were finished their game.
The next step will be a return to competitive golf and Open Competitions. Brophy urges caution.
“We will do everything in accordance with the golfing union guidelines. It is easier to set this up slowly rather than having to go back and reintroduce a (previous ) measure,” he says.
Incredibly, over the four weeks, there was only one hole-in-one recorded with long-time member Bernie McDonald holing out with her tee shot on the 13th.
Further south Bunclody Golf and Fishing Club was also buoyed by the return to golf which was boosted by the good weather. They hope to attract visitors shortly.
“The weather has been fantastic and at the moment we are all so happy to be out,” said ladies captain Bernie Foley. Like Carlow, the club is sticking rigidly to the guidelines set down by the golfing unions but are planning to host Ladies and Gents Open Singles competitions starting on 1 July.
In Kilkea Castle Golf Club, their take up of the game is a mirror image of the Carlow experience. Sales Director of the Kilkea project, Adrian Mooney, was delighted.
“We have adhered rigidly to the government and golf union guidelines. It was incumbent on all of us to ensure safety element were adhered to.
“We are glad to be operating. Our green keepers worked during the close-down and the course is in magnificent condition,” he said.
With further easing of restrictions Mooney said Kilkea will do its best to facilitate members and visitors alike.
“We have had a lovely increase in membership. Everything has gone smoothly and we are looking forward to have more fee paying golfers.”
The Kilkea sales director also confirmed membership is open. Details at www.kilkeacastle.ie.