By Michael Tracey
TINRYLAND GFC has commenced a new chapter as it began reopening the club this week.
The club had been the venue for the county’s Covid-19 testing facility. Around 500 people were tested in the club grounds in March and April before it closed.
The testing centre was dismantled on Friday by the defence forces. The grounds and club house were subsequently disinfected and deep cleaned over the weekend. The club’s main sponsor Xenon also presented one of their much sought after Fever Defence units on Monday.
Tinryland players and officials along with the Bennekerry-Tinryland ladies footballers are eagerly awaiting the return to training at the end of June and the new technology will prove to be a major boost with the new protocols. It will enable all club players, members and officials to self-check their temperatures before entering the club and will set the standard for other clubs both inside and outside the county.
The club was delighted to have their grounds back and start a new chapter in its rich history.
Chairperson Bernard Mullen said: “We are like every club. We are anticipating the day we can see the guys and kids back on the field playing. That’s the big thing. It’s a sense of relief that this has passed for now and there is also the admiration for the people that worked out there (at the test centre), the local nurses. The people of Carlow owe them a huge debt of gratitude.” 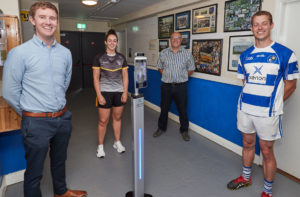 Fever Defence is a standalone device designed by Xenon that uses a thermal imaging camera and facial detection camera to test people’s temperature upon entry to a site.
“It’s like a traffic light system,” explained club committee member Eamonn Byrne. “You walk up to it within a metre or metre and a half and it gives you a temperature to a minute figure. If it gives you a green light, you can go in.”
Xenon’s Managing Director is club member Paddy Byrne and he was on hand to make the presentation on Monday. Among others in attendance were county footballer Paul Broderick and ladies footballer and front line worker, St James’s Hospital nurse Róisín Byrne. 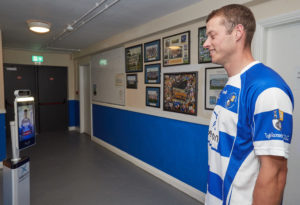 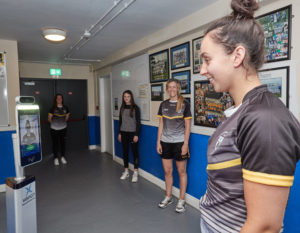 Roisin Byrne has her temperature taken

Bernard thanked Xenon and other local businesses for their support and patience during the lockdown.
He expressed the hope that the club can return to some degree of normality as soon as possible. The club’s walking track reopened on Tuesday while the gym and bar areas will still be out of bounds until government guidelines permit. Each team must adhere to the specific time slots that have been allocated when training recommences.
Tinryland players including Bennekerry-Tinryland ladies have been doing individual training during the lockdown. Both clubs raised over €8,000 in a recent relay for life fundraiser for Pieta House.

The late May Byrne loved her native Tinryland