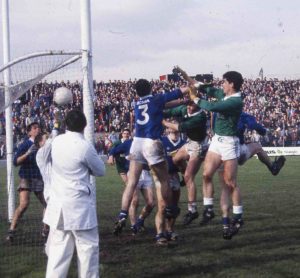 The goal scored from a Joe Hayden free which was controversially disallowed during the All Ireland club senior football championship final replay in 1993. O’Donovan Rossa full-back John O’Donovan contests the ball with Éire Óg forwards Joe Murphy and Darren Moore in the small parallelogram, but were they in the small square before the ball? The referee thought so Photo: Karl McDonough

By Kieran Murphy
WHEN Éire Óg met Portlaoise in the Leinster club semi-final last November in Portlaoise you could say Monsignor John Byrne was in a no-win situation. Then again you could argue that no matter what the result was he couldn’t lose.
Before moving to Portlaoise, where he has spent the last 20 years, he had been President of Éire Óg from 1991 to 2000. His term in Carlow coincided with the glory years for the club. The YIs won five Leinster titles in seven years. All-Ireland success eluded the Carlow kingpins but their achievements captured the imagination of many GAA people all over Ireland and abroad. Carlow clubs were united in support of the men from Teach Asca.
“The specifics are gone from my memory now but it was an extraordinary time,” said Byrne who became a Monsignor in 2009.
It all started in 1992 when Éire Óg beat Meath champions, Skryne, in Dr Cullen Park. Baltinglass, the 1990 All Ireland champions, were confidently expected to see off the Éire Óg challenge in the Leinster semi-final in Athy but the Carlow side caused a surprise.
“They were four or five points down with about 15 minutes to go. They produced a fabulous display of football. Heart, everything … they had arrived,” recalled Msgr Byrne.
The former Éire Óg President said the Carlow club had, even by that stage, had begun to draw a loyal following from all over the county. 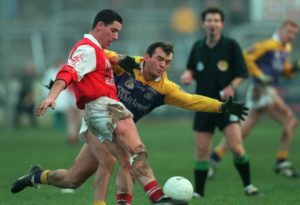 “It was quite unique for any club in any county to have 95% support from their county. All is fair in love and war. Clubs hate (in sporting terms) each other really. The opposition and rivalry is there. In their eyes there is no good person belonging to that club.”
Laois side Ballyroan had come through from the other side of the draw and would have been confident enough of winning a first provincial final. Monsignor Byrne suggests that going into the decider Éire Óg were not intimidated as much as they could have been if they had faced different opposition.
“That first Leinster final was amazing. Ballyroan were very new Laois champions. I do think there was a psychological factor in making the breakthrough. It was a big help to Éire Óg that it was a team we didn’t fear by reputation or by name. It wasn’t Portlaoise and it wasn’t the Dublin champions.”
That day in Newbridge the wind howled down the pitch and away from the dressing room end of the ground. Anthony Keating scored a first half goal but it didn’t look to be enough. Early in the second half the same player netted once more. Despite playing against the wind, Éire Óg were a lot more comfortable winners than the 2-5 to 1-7 score line suggested. 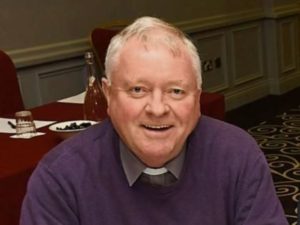 Monsignor John Byrne, now based in Portlaoise, was the president of Eire Og during their hugely successful years in the 90s

“Éire Óg turned out to be fantastic against the wind. Up in Knockmore it was a case of battening down the hatches. Particularly with Jimmy Dooley (against Knockmore) getting sent off as well. They defended a lead. You could talk forever about some of those games,” said John.
That day which John refers to was away from home as Éire Óg defied the odds to beat Knockmore, the Mayo and Connacht champions on their own pitch. Carlow supporters travelled in their droves that day. A special train was even commissioned to bring supporters to the game.
“By that time Carlow was on the march in support of the county champions,” agreed Byrne.
That year Éire Óg came so close to All-Ireland success. They won thousands of admirers all over the country in a classic club final on St Patricks’ Day 1993 when drawing with O’Donovan Rossa in Croke Park. Their replay defeat in Limerick was heart-breaking. There is a case to be said that the two-game saga against the Cork champions profiled the All-Ireland club finals and created a level of interest in them which has endured right up to the present day.
The following year Éire Óg regained the county title and subsequently rattled their way through Leinster beating Erins Isle of Dublin in the provincial final.
The Reds gathered a huge following from both inside and outside the county. Monsignor Byrne recalls getting into his seat in Newbridge for a Leinster final. He didn’t recognise the accents of a number of young supporters immediately behind him. He knew they were definitely not from Carlow.
Yet, when the game started, these strangers referred to the nicknames of the Éire Óg players and were as familiar with them as well as anyone on Barrowside was.
“Those children and their parents, and I know myself from my own nieces and nephews, recognised Smoky Joe (Joe Hayden), Rooster (Colm Hayden), Skippy (Alan Callinan) and Muckle (Anthony Keating) who had become names as well known to them as any other sports stars.”
Talking to these strangers afterwards they told the Carlow priest they were from the same Mayo club as Éire Óg midfielder, Hughie Brennan’s who had settled in Carlow some years previously. They had supported him and his adopted club in the All-Ireland final. They continued to travel to Éire Óg games after that. There were countless similar stories.
“I remember Carlow’s Fr Moling Lennon, Seamus Aldridge and a fella called Jim Clarke. Two Kildare men who accompanied Fr Moling were on tenterhooks as much as any Carlow person. There was a huge support for Éire Óg. A huge county turnout, Carlow people everywhere and a lot of people outside the county admired the David and Goliath aspect if you could call it that.
“The support was massive. No matter what club they were from they really latched on. The players became household names which is unusual for club players. It was a great phenomenon.”
Yet Monsignor Byrne admits he never saw it coming. Éire Óg beat Tinryland in a drab 1992 county final. The club celebrated and he recalls a conversation he had with Bobby Miller, the winning trainer, that night.
“Bobby. That was a poor county final. I don’t think you would get a good team out of the two of them.”
Miller contradicted him.
“You are very wrong about that,” he replied.
“Really?”
“Absolutely. There are very good footballers on that team. They will go very far in the Leinster championship,” said Miller.
The Carlow priest scratched his head on the way home.
“Either I know very little about football or Bobby Miller knows nothing about football,” he mused.
“Fortunately I was wrong. What, I think, happened was that Bobby transferred his confidence into that team. He believed in them and he got them to believe in themselves. They were a very fine team.”
To this very day the disappointment of Joe Hayden’s disallowed goal in Limerick still rankles.
For the record O’Donovan Rossa won the All-Ireland replay by 1-7 to 0-8. With time almost up Joe Hayden floated a free into the opposition small square. An Éire Óg player jumped and the distracted defence allowed the ball past them and into the net. Shortly before that, at the other end of the pitch, a similar incident saw John Kearns, the Éire Óg goalkeeper, punch out under pressure from an opposing forward. Mick McCarthy picked up the rebound and drove the ball home for the only goal. It was the decisive score of the game.
Either both three-pointers should have stood or both should have been disallowed. It was a bitter pill to swallow.
“Dreadful, desperate. One of the great pities that the breakthrough wasn’t made,” said the monsignor who takes consolation in the fact Éire Óg contested eight Leinster finals, won five, drew three and lost none in those wonderful years.
He says there was an aura around the team. For a change, a Carlow side was getting the rub of the green in big games which good teams sometimes tend to get. 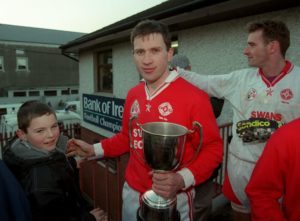 “What I would say about playing Dublin teams was that there was no fear factor. I saw Éire Óg winning games against better teams. Éire Óg became the fear factor. Their reputation stood to them big time. The rub of the relic was coming. A little favour was coming. The sort of decisions which comes for good teams,” relived the former Éire Óg President.
If there is one game John remembers above all others it was a drawn Leinster final against Kilmacud Crokes in Tullamore. The weather was awful and Éire Óg were out on their feet. Somehow they managed to force a draw. The only people who wanted extra-time that day were the Dublin champions. Ultimately, referee Brian White, decided to let the teams have another day out.
“My memory is of getting out of there and living to fight another day,” said John. Éire Óg made good their escape that day and won the replay. It was a last hurray for that group of players who were beaten by Crossmaglen Rangers (1-10 to 1-5) in the All-Ireland semi-final.
The Reds did go on and win another county final but the following year the wheel had turned full circle and their town rivals, O’Hanrahans, took over winning three in a row in Carlow and securing a Leinster title against Na Fianna in Portlaoise in 2000.
Those successful years in Éire Óg meant so much to Monsignor John Byrne. It was at the time when there was so much controversy around the changes in Carlow Cathedral which were not popular with a number of people in the area. It was a fractious time to be a parish priest in Carlow.
Football and Éire Óg gave the cleric an outlet away from the job and the controversy.
“It was a great break and recreation for me to get away from more weighty matters. It was a difficult time when we were doing up the cathedral.
“It was a marvellous time to be associated with Éire Óg. It was a very important part of my life at the time. The club was great. The football was great. The lads were great.”
After what he saw in 2019 when Éire Óg were back in a provincial decider he still feels there is an All-Ireland in the club.
“It was a marvellous time to be associated with Éire Óg. I would love to see them some day lifting the Andy Merrigan Cup.”

End of an era as Murphy steps down at Éire Óg