No festivals or blitzes at juvenile GAA level this year 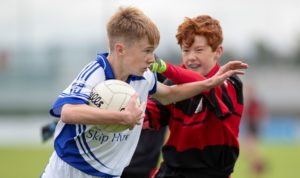 Grange’s Aidan Burrows and Pauric Kavanagh of Mount Leinster Rangers in action during the U15 football final between the teams last September
Photo: Thomas Nolan Photography

JUVENILE GAA games in Carlow could be set to resume in August. At a recent Coiste na nÓg meeting it was agreed to send out letters to clubs asking if they would be interested in holding games at that time and in which format they would like them to take place.
Coiste has proposed that the familiar schedule of festivals and blitzes will not take place this year and instead, clubs should host one team only on the day of the match.
While it is anticipated that minor (under-17) will run a regular championship, there is no clarity as yet on how younger age groups will be organised.
“We are looking to do a smaller programme. We want to give players and clubs games if they are interested. We’re not forcing anyone, obviously. We would run a programme from August to October,” said Games Development Officer Sean Gannon.
While it is expected the senior hurling and football championships will be run off in two separate blocks, with the hurling competition run in its entirety before the football begins, Gannon says underage games would not follow that template.
“We did consider going for one block of hurling and one of football, but if we go one week on, one week off we would be going for 14 weeks. It would give more time for players to be with coaches and that sort of thing,” he said.
The Coiste committee is currently awaiting feedback from clubs.
“We will make a decision when we get word back. There will be no festivals bringing clubs and teams into one area. That won’t happen. We don’t want huge numbers congregating,” said Gannon.