Campion says GAA should have held firm on fixtures 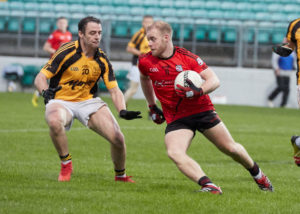 Kildavin/Clonegal’s Eoin Roberts and Naomh Eoin’s Shane Kavanagh in action during last year’s intermediate football championship. Sean Campion says the decision not to have promotion and relegation this year will not be reversed Photo: michaelorourkephotography.ie

By Kieran Murphy
Carlow county board chairman Sean Campion has criticised the decision by the GAA to try and cram what could be three major competitions into the last five months of the year.
An announcement is expected this week on the format of the intercounty championships while there are also suggestions that any outstanding league games could also be played off before the end of 2020.
This means intercounty players who have an elongated run in their local club championships could be playing almost every week until the end of the year without a break, with many also required for dual commitments at club level.
“I know there has been a lot of pressure from media and government but I think they (the GAA at national level) should have stood their ground. We are trying to compact everything into a few months. It might have been better if they had decided to come back with the club scene only. Now they are trying to fit in a championship and trying to finish off the league,” said Campions who also suggested the powers that be are ignoring how many games top players are potentially being asked to play.
“Talk about player burn-out. It only comes into the equation when it suits people. Now players are being asked to finish off a (club) championship and then go play with the county. Then you are back into a pre-season for 2021. We are trying to pack into a few months what took nearly a year to do.”
Meanwhile senior county board officers are also finding themselves immersed in decision making at all levels.
Last Tuesday a county committee meeting via video link agreed to run off the club championships without promotion and relegation but it is understood that, by the end of the week, the Fighting Cocks club had sent an e-mail to the seven other clubs in the intermediate championship asking them to revisit that decision.
Campion says this will not happen and clubs will not be put into a situation where they could be relegated because some of their players are unavailable due to fears of contracting the Covid-19 virus.
“They (Fighting Cocks delegates) made their point at the meeting the other night but there is no option. We don’t know what teams are going to be short because of this virus. It is different if a fella is out with injury. A team could be down four of their best players who have refused to play because of the virus.”
It was initially decided there would be no quarter-finals in the football championships this year but the county committee meeting decided against that and clubs will play quarter-finals if they make the knock-out stages.
With the easing of restrictions as announced by Taoiseach Leo Varadker last week, there is now more room to bring forward the club championships. Campion says he prefers to see what the GAA is going to announce at national level this week before making any major decisions at local level.
“With the easing of restrictions there is scope to bring forward the start date for the county championships but with the situation evolving by the day, it is not easy to make any definite plans.
“Pending on the situation we may be able to move fixtures and not have midweek games. We will look at that but we do need to see the county fixtures,” Campion said.
Meanwhile, Ballon GFC secretary Billy Fanning has said his club is happy enough with the decisions taken at the county committee meeting.
“We were disappointed with the initial proposal of getting only three matches in comparison to the hurlers who were getting four games,” he said.
“They were giving the whole initial period of football but we would have preferred to have two weeks of hurling and two weeks of football, or something like that.
“In fairness they have introduced quarter-finals which gives us a chance of having four games which brings us back to some level of parity.”
Campion also confirmed that he, Eddie Byrne (Mount Leinster Rangers) and George Darcy (Bagenalstown Gaels) have been tasked with finding a new Carlow senior football manager. The chairman says it is early days yet but that he hopes to have the position filled by the start of the local football championships.
“At the moment we are just putting names together. I don’t see us having a manager by the weekend. We will be making contact with people but they need time to sit down and think where they are. Hopefully we will have one in place by the start of our club games,” said Campion.