Poacher throws his hat in the ring 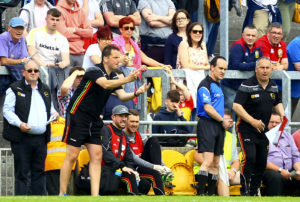 Steven Poacher gives instructions from the line during Carlow’s win over Kildare in the 2018 Leinster senior football championship. The Down native had a big influence on Carlow’s style of play during his time as part of Turlough O’Brien’s management team Photo: Inpho/Ken Sutton

Loss of revenue will affect all levels: Campion