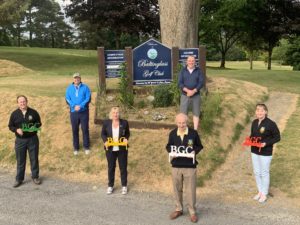 WHILE many sports clubs are only opening their doors now, golf clubs are into their fifth week since they allowed members back onto the fairways and the greens. Competitive golf will return later this month. Being a smaller club, many of the Baltinglass golf club members have worked alongside the green-keeping staff helping to ensure the course was maintained to a high standard. There has also been a surge in membership.
“We have taken on over 80 full members and 40 student and juveniles,” said long-time member Niall Doogue.
“Some had golfed before. Some are current and former GAA players. We are abiding by the Covid-19 guidelines and thankfully the club is very busy. With the enforced rest the course is now in amazing condition.
“Without the volunteers we wouldn’t be functioning. They have cut the fairways, minded the bunkers, sanded greens. There was a huge clean-up during lockdown,” noted Niall.
Last year the picturesque club, with the Slaney running outside its front door, won the Provincial Towns Cup when beating the four previous winners, Tullamore, Wicklow, Kilkenny and Enniscorthy, along the way.
They would relish a chance to retain the trophy and maybe add something else to their trophy cabinet.
“The golf unions are hoping to launch interclub competitions on June 29th. If they do we would love the opportunity to try and retain what we won last year,” suggested Niall.
The Baltinglass club is also offering a range of membership offers up to the end of 2021. For more information contact the club at 059 6481350.