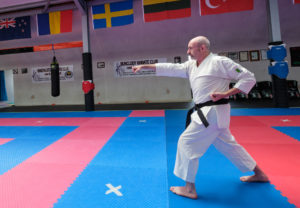 By Michael Tracey
THE devil is in the detail as combat returns to training in the weeks ahead.
Social distancing is out the window if you are literally cheek to cheek, but
local boxing, karate, jiu jitsu and other martial arts clubs are dealing with Covid-19 in a variety of ways.
As it stands, groups can return to indoor sporting activities at the start of Phase 3 from 29 June. However, full contact is only permitted from 20 July.
This roadmap seems clear on the surface. However, clubs are trying to solve the puzzle of reopening safely, with searching questions to be answered.
Noel Amond runs the Bigstone, Ballon, Ballinabranna and Bagenalstown karate clubs.
He plans to reopen his Bagenalstown dojo from 29 June practicing technique and combinations, but there will be little movement and no sparring.
He said directions are starting to come from Sport Ireland of what reopening will look like.
However, Noel said it was still not known exactly how many people could train indoors.
“A good scenario would be that they will allow each person to have a three-metre-squared area; that would be brilliant,” said Noel. “An okay scenario would be only to allow 15 on the mat. A bad scenario would be just 10.”
Noel has begun to reconfigure the layout of his Bagenalstown dojo in preparation for the resumption of classes. He will have to wear a mask, gloves and foot protectors. There will be no bare feet when the dojo reopens.
Training sessions will only last for one hour and there is advisory cautioning against very intensive sessions.
It’s uncertain whether some of the venues Noel uses for classes will reopen.
There will also be restrictions with equipment. Focus mits or strike pads won’t be used, as the person holding them would be exhaling. Spectators will not be allowed in, while contact tracing will be set up.
However, children aged under 13 would not be required to wear masks.
It’s fair to say that there is no ‘one size fits all’ approach for combat sports. 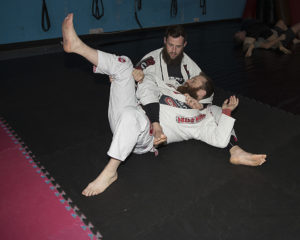 Full-contact Jiu jitsu is set to resume on 20 July after being pushed forward from 10 August.
Brian Connolly of local Jiu-Jitsu club Attic BBJ Carlow said: “20th of July is ‘go day’ for us.”
The club on Charlotte Street in Carlow town will have breaks between classes for cleaning. The showers will be shut and members will be distanced in the dressing room. They will have to do a temperature check before entering the gym, while there will also be plenty of hand sanitiser.
However, it doesn’t get more close contact than Jiu Jistu, with grappling and wrestling. It’s literally cheek to cheek.
“In the sport we do; hand sanitiser is going to do very little!” said Brian. “It’s all-in or nothing.”
Brian added: “People want to get back training, back to normality and try to get a bit of fitness back and enjoying the sport.” 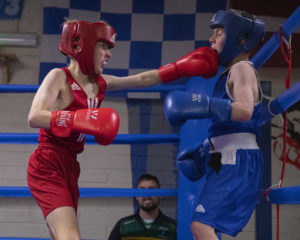 Fighters get in close during an event at Raging Bull Boxing Club, Carlow, in December. Boxing clubs have been waiting for guidelines on how to return to training in a safe manner Photo: Thomas Nolan Photography

Mick Byrne of Raging Bull Boxing Club on Green Lane, Carlow said the club was “still up in the air” about when it will be back.
Currently, the club can resume activities in late June but, frustratingly, the Irish Athletic Boxing Association has given no directions on how it should proceed.
“They are dragging their heels,” said Mick.
Raging Bull Boxing Club has around 90 members, the vast majority juveniles. Some nights, up to 60 might turn up to train, but a return to training poses several headaches.
“With the space we have, we might be able to bring in 18 to 20. Which 18 or 20 do you bring back? It’s going to be an absolute nightmare for us,” said Mick.
“If you are sparring, you are sweating on each other. Maybe there is a splash of blood. Do you train with a mask? Do you stop training every now and then to wash hands?”
Mick was concerned for the health of members, including himself. He is prone to bad chest infections in the autumn and winter.
“I am half worried for myself even going back,” he said.
The clubs we spoke to hadn’t been opened since mid-March. Noel recalled that his last class was on Thursday 12 March, when the government announced the closure of schools. He had a class that day and only two children out of 20 attended. It is worth remembering this and how quickly things can change, as clubs begin to open their doors.
“That was the light-switch moment,” he said. “Wednesday it had been full on. Thursday, it was dead and it’s been like that ever since.”
Brian had spent four years building up the Jiu Jitsu gym, to the point where he did not need a second job or nixer to get by. Now he has to start over with an expectation of reduced numbers returning.
“I have done it once. I will do it again,” he said. “It’s just going to be a bit of longer grind this time to get to where we were.”
His members have financially supported the gym during lockdown, which has covered overheads. Brian had also run Facebook live classes in the lockdown.
“The support we got from our guys was second-to-none. Guys who had even left us and moved on came back to pay fees. They really stepped up to the plate.”