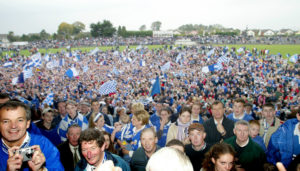 By Tommy Murphy
THE official opening of Dr Cullen Park took place on 9 August 1936, and it wasn’t long before the grounds hosted many big Leinster Championship games with massive attendances coming in through the gates.
On 11 June 1937, Kildare took on Laois in front of a reported attendance of 10,860 with gate receipts of £754, while a further £211 was taken in for extra seating on the sideline.
In 12 June 1938, Wexford played Offaly in front of a gate of 7,000 people, taking in £460 on the gate plus £125 for the sideline. In July 1938, Kildare played Offaly in front of 10,740 and a gate of £840 plus £270 for the sideline.
There were many games for Carlow too, of course, with Laois visiting on 18 May 1941, taking in £341 and on 8 June the same year, Carlow played Wexford with £344 taken at the gate.
On 28 May 1944 Carlow took on neighbours Kildare in their preliminary round Leinster championship game. The first game had ended a draw at Geraldine Park, Athy, Carlow 1-10 Kildare 2-7. But on home soil, in front of an estimated attendance of 6,500 people, Carlow recorded a convincing 3-11 to 2-5 win.
This was, of course, the start of a journey which saw Carlow go on to win the Leinster title, a victory with saw a rise in the numbers coming to support the county team.

Foot and Mouth
The early 1940s was indeed a time of upheaval in Ireland with the dreaded Foot and Mouth disease creating huge challenges to Irish life.
Rural life was affected in particular with herds of cattle wiped out throughout the country.
Like in recent times, movement was restricted with sport, including Gaelic games, thrown into turmoil.
In 1941, at the height of Foot and Mouth, Carlow actually reached the Leinster final. They endured a mammoth four-game saga with Wexford in the semi-final – Carlow 3-10 Wexford 4-7, Carlow 2-7 Wexford 2-7, Carlow 1-12 Wexford 3-6 after extra time – before finally getting over their rivals in the third replay on 27 July. The final score was Carlow 2-8 Wexford 0-3. After a game apiece at Dr Cullen Park and Wexford Park, the third and fourth games were held at Croke Park.
However Carlow then had to wait until November for the provincial final against Dublin. The three-and-a-half month wait did not suit Carlow and even though the game took place at Dr Cullen Park, they went down to the Dubs by 4-6 to 1-4.
It’s worth remembering that Ireland was a poverty stricken country at the time. The ordinary bicycle was the most common mode of transport, and so many thousands of people cycled all over the county and province Sunday after Sunday to see games.
Even keeping the bicycle on the road was difficult as tubes, tyres and many essentials were in short supply due to the ‘Emergency’ as World War II was known in Ireland.
Many people used what was known as a double tyre on their bicycle, and late hours were spent on Saturday evenings fixing the bicycle to make sure it would last the distance the next day. It was common to see people on the side of the road mending punctures, making sure they had all the necessary tools to repair and continue on their journey.
Many made the journey to games by train too, and if all else failed you might have to walk! But the most important thing above all was to get there in time to see the ball thrown in.
Moving on to the 1950s and in 1954 Offaly played Wexford at Dr Cullen Park, attracting perhaps the biggest crowd ever in the county grounds of 21,000 supporters. Two years later 18,000 came to watch Dublin play Wexford.
The national hurling league semi-final and replay between Kilkenny and Wexford in 1978 attracted a full capacity to the county grounds on both days and they were two thrillers. On 16 April the game finished Kilkenny 3-5 Wexford 2-8 and two weeks later it took extra time for the Cats to edge the game by a single point – 5-15 to 5-14. Unfortunately for Kilkenny, they lost out to Clare in the league final by 3-10 to 1-10 in Semple Stadium.
In those days, of course, the banks of Dr Cullen Park were a grass surface and the crowd could go where they liked to stand shoulder to shoulder and see their heroes playing.

Modern times
One of the biggest attendances in more recent years was in 2003 when 18,000 supporters crowded in to watch Laois beat Dublin in the All-Ireland minor football championship replay.
At club level, the biggest recorded attendance came in 1952 when Palatine played Ballymurphy in the senior football championship final in front of 7,006 people.
Over the years, many Gaels from around the country have spent an afternoon at Dr Cullen Park, following their team or just enjoying a game.
Some have become regular returnees like Mick McDonagh from Tullamore, known far and wide as ‘the man with the Offaly jersey’. Mick always had praise for the stewards in his many visits to the grounds.
From a local perspective, not too many people have memories of Dr Cullen Park stretching back to the 1940s. But one such man is Vincent Harvey. One of Éire Óg and Carlow’s great players, Vinny would follow his father to training as the team prepared for the 1944 Leinster championship. As a young boy of eight, Vinny would perform the important role of keeping the balls kicked out for the players every evening. It was a job much appreciated by the players and it certainly whet Vinny’s appetite for a lifetime involved in the game. Seventy-six years later, he’s still going strong.
We would welcome memories and stories from players, supporters and clubs on all aspects of Dr Cullen Park. Contact Tommy Murphy on [email protected]