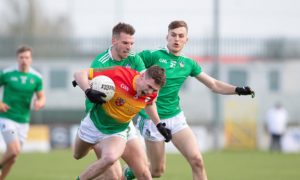 By Kieran Murphy
THE job of the three-man committee assigned to search for a new Carlow senior football manager is proving difficult with county board chairman Sean Campion admitting the level of interest in the position is relatively low.
While the recruitment committee had hoped the new manager would be in situ by the start of the club championship, this is now unlikely to happen. The three-man task force, which includes Campion, Eddie Byrne (Mount Leinster Rangers) and George Darcy (Bagenalstown Gaels) are not going to rush into making a decision.
Campion says he is unable to say when they will have the position filled.
“We are talking to a few people at the moment and that is where it is. There is not a whole lot of interest. The people we are talking to are people who were on our list. We made contact with them to see if they were interested. One or two got back to us and we are still waiting for others who may be thinking about it, who have to come back to us.
There is nothing definite,” Campion confirmed.
They had hoped to have the position filled by the start of the club championship but with the GAA Advisory Committee now allowing club championships to begin on 17 July, two weeks earlier than initially planned,, it looks as if there will not be enough time to have the position filled.
Campion is in two minds about the wisdom of bringing forward the championship start dates. However it does give the fixtures committee more time to play around with.
“We have a two-week grace period which we didn’t think we would have,” the chairman said. “If we come back two weeks earlier, starting our games on the 17th rather than the 31st, we can take out the mid-week matches.”
Images from the GAA press conference at Croke Park last Friday showed GAA club and games administration officer Feargal McGill, President John Horan and Director General Tom Ryan socially distancing at the top table. In front of them, journalists were also at least two metres apart. This struck a chord with Campion.
“If you look at them in the conference, they were apart from one another. But then they are expecting people to go into full contact. To me there is something wrong.
“OK, clubs have to make their own mind up. And individuals more than clubs if they are going to play and be a part of it. Some will and some won’t.”
In October, Carlow are scheduled to play a national football league home game against Sligo. After that they were due to travel to London for their final NFL fixture. Campion doesn’t envisage Carlow making that trip.
Sligo, who are in joint third place on six points behind Limerick (8 points) and Antrim (7 points), are still in with a chance of promotion.
“The London game will definitely not be going ahead,” confirmed Campion. “We need to look at the league positions to see whether the Sligo match is a necessity. I think they are still in contention (for promotion). They have to win their last two games and hope they get a result somewhere else. Our game will have a bearing for them.”
Meanwhile, the Carlow GAA management committee will meet this Thursday to discuss whether they will bring forward championship dates by up to two weeks in response to the government’s decision to allow sports to return to play in mid-July.
The Coiste na nÓg committee has also been busy drawing up an underage fixtures programme which will begin on the weekend of 18-19 July with U11 and U13 football games, followed by U11 and U13 hurling a week later. U15 football will begin on 23 July with U15 hurling on the 30 July.

Campion says GAA should have held firm on fixtures