Borris Fair to be cancelled 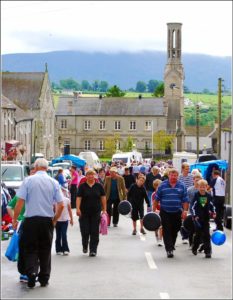 Borris Fair, the annual horse fair that takes place on 15 August, is not likely to take place this year over fears about crowd control.

Cllr Willie Quinnn raised the issue at the last meeting of Muinebheag Municipal District as local people had voiced concern about it taking place.

“People in Borris are worried this year because of the Covid restrictions. There’s no way that you could control the crowd, it would be far too big,” cllr Quinn said.

Senior Engineer Gerry Crowley replied that the council was also “very concerned” about it taking place, adding that the local community gardaí were liaising with Pavee Point, the organisation that represents Travellers, about it.

Muinebheag Town Manager, Padraig O’Gorman, said that the fair would not be going ahead.

“It will be cancelled. Gardaí are of the view that the fair won’t be able to proceed. They will not allow it to be held. That decision has been made,” Mr O’Gorman said.