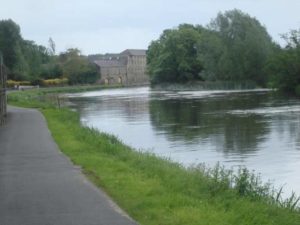 The Barrow in Bagenalstown

Cllr Arthur McDonald has called up the council to look into getting Waterways Ireland to dredge the river Barrow so that it’ll be suitable for a cruise boat to sail on.

The newly-elected cathaoirleach of Muinebheag District Council expressed concern at a recent council meeting about silt and mud clogging up a stretch of the river between Bagenalstown and Leighlinbridge. He made the remarks because there are plans to sail a 16-passenger cruise boat between the two towns.

The boat, which costs about €100,000 according to cllr McDonald, is almost completed after it was commissioned by Carlow County Council and built in County Cork.

Jerry Crowley, senior engineer, said that dredging the river would be up to Waterways Ireland and that he would look into it.