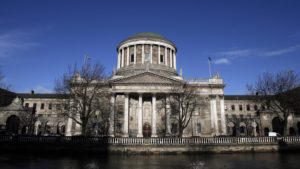 A LOCAL businessman has claimed before the High Court that a former developer is using the firm of criminal Martin ‘The Viper’ Foley to try to collect a disputed debt from him of more than €100,000.

The court was told that Mr Fitzpatrick has alleged that he is owed money by Mr Brennan. Lawyers for Mr Brennan, who says he does not owe a debt to the defendant, secured a temporary injunction after several persons that he claims work for Foley’s firm arrived at his home last week. Mr Brennan says the men threatened both him and his family, demanded that he pay Mr Fitzpatrick and said they would return later this week to get the money.

The interim injunction prevents the defendant ‘or any of his servants or agents from intimidating, threatening, watching or besetting’ Mr Brennan and his family. The temporary injunction was granted on an ex-parte basis by Mr Justice Michael Twomey last week.

Seeking the injunction, Rory Kennedy, counsel for Mr Brennan, said his client denies that any debt is owed to the defendant, Mr Fitzpatrick. Mr Kennedy said that the defendant purchased 400,000 shares for €100,000 in a company called Moralltach Global Plc, of which Mr Brennan is a director. Counsel said the defendant still retains the shares and has not brought any court action against Mr Brennan in respect of the alleged debt.

Mr Brennan claims that he and the other directors of the firm have received threatening phone calls from the defendant over the alleged debt. Mr Brennan said it had left him upset and his family in a state of distress. He said that the defendant, Mr Fitzpatrick, had engaged the services of Martin Foley, also known as the Viper, and Viper Debt Recovery and Repossession Services.

The men spoke to security guards at a building in the town, which Mr Brennan uses occasionally. The men told the guards they would be sorry if they interfered in this business, the court heard.

The gardaí were called and the men travelled to Mr Brennan’s home, which is located a mile outside Bunclody.

At Mr Brennan’s home, counsel said, the men demanded payment of the monies allegedly owed to Mr Fitzpatrick, refused to leave unless they got their money, threatened Mr Brennan and upset his family, counsel said.

Counsel said that the men said they would be back, stating they would return on Tuesday 23 June.

As a result Mr Brennan has made a statement to the gardai and instructed solicitors to seeks orders against the defendant.

Mr Brennan is particularly concerned about Mr Foley’s involvement, given his long-standing involvement in criminality, the court was told.