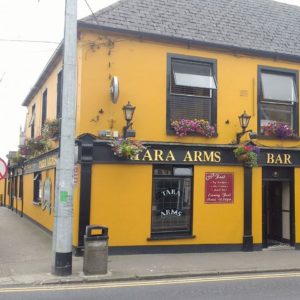 “I’M very apprehensive … it’s a strange way to do business, but if it doesn’t work I am prepared to close the doors again,” stated publican John Colgan.

John runs two very popular establishments, the Tara Arms in Tullow, which, because it serves food, reopened its doors yesterday, and Carpe Diem in Carlow town, which remains closed until 20 July. “We are opening and will do our level best to ensure all the safety precautions are adhered to; that’s the biggest issue. But if they aren’t, I am prepared to close the doors … it’s as simple as that,” said John.

“We have done monumental work here to get the place ready for opening. We’re also doing a shorter day, starting at 12.30pm and closing at 9pm. All the rules are in place and they have to be adhered to. We will be operating a strict door policy,” he added.

In Tullow, the Tara Arms and the Derreen are the only two pubs opening this week, as they serve food. John points out that this makes them the only pubs open between Gorey and Carlow town and from Fenagh to Baltinglass.

Like so many publicans, John has concerns that the public will fully accept the regulations, which state that patrons buying alcohol must also buy a meal to the value of €9 and are only allowed on the premises for a total of 105 minutes. He admitted that in recent days he had received calls from loyal customers looking forward to their social pint, yet expecting a more relaxed attitude to the rules.

“I’ve had to tell them no, we are absolutely abiding by the rules. To be honest, I’m really not sure about any pub reopening now. This reopening is really about reopening cafés and restaurants and because some pubs serve food they were added on, but we are principally publicans. This has been forced on us, so we’ll have to see if it works … I’ll know this evening,” said John.

“But if it doesn’t work today, I will close the doors.”