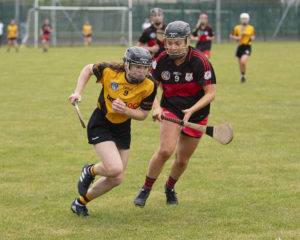 By John Foley
CARLOW Camogie has put together a busy schedule of fixtures for the coming months for all ages and grades following the announcement last week by the Camogie Association that the 2020 Liberty Insurance All-Ireland Championships will take place between October and December.
At adult level, the Carlow senior and junior championships will commence on 20 July with a final in early September. The adult autumn league involving non-county players will be held from mid-September to the end of October.
At juvenile level, there will be Go Games for U6 through to U12 age groups in August and September with Carlow camogie awaiting guidance on how these will take place.
At U12 level there will be a mini-league run from August through to mid-September on a week on, week off basis with the ladies football juveniles taking alternate weekends.
The same system and time frame will apply to the U14 camogie championship with a minimum of four games per team.
The U16 championship will run from 17 July through to mid-September, also with a minimum of four games, while the U18 championship will take place from August to October, subject to intercounty fixtures.
“The revised plans are based upon the shortened resources, increased responsibilities on returning to play and are reflective of the climate we are now living in,” said Carlow camogie chairperson Linda Kenny. “It is going to take a lot of co-operation and understanding from all involved but any games at this stage must be seen as a bonus.”
She said that in order to run a games programme, Carlow camogie will again be dependent on GAA colleagues at county and club level for the use of facilities.
“Similarly we will be working closely with our colleagues in Carlow LGFA to plan fixtures as best we can with dual players in mind,” Linda said.
The Camogie Association is expected to confirm the exact format and dates of national championships in the coming weeks.
The 2020 national camogie leagues which began in February have been cancelled. The All-Ireland championships will begin on a round-robin basis with an increased number of groups before progressing to the knockout stages. There will be no automatic promotion and relegation in the All-Ireland championships.
The All-Ireland U16 championships will take place between October and December while the All-Ireland club championships will proceed as normal but with a revised calendar that will run into 2021.
The 2020 All-Ireland minor championships which began in February have also been cancelled, however minor competitions will take place on a provincial basis in 2020.
“We welcome the decision of the Camogie Association to ensure club activity was given priority and our county managers fully support this,” said Linda Kenny. “Intercounty training for all our squads will commence from 14 September.”