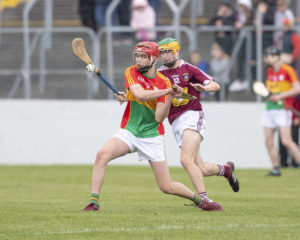 Carlow’s Niall Bolger and Westmeath’s Andrew Shaw in action during last year’s Leinster minor hurling championship. The teams will meet once again in the first round this October Photo: Thomas Nolan Photography

THE Carlow minor hurlers and footballers can begin to look forward to big dates in October after the draws were made for this year’s Leinster championships.

The footballers face a tasty tie with neighbours Laois in the championship quarter-final on Wednesday, 28 October. In the other quarter finals, the winner of Dublin and Meath will play Westmeath, Wexford or Louth will take on Kildare while Wicklow or Longford will play Offaly.

Fixture details, venues and home advantage have yet to be confirmed. The provincial final takes place on 18 November.

The Carlow minor hurlers begin with a first round game against Westmeath on 17/18 October. The winner of that game will take on Dublin in the quarter-finals a week later. Once again, venues are still to be confirmed. The Leinster minor hurling final is fixed for 15 November.

Meanwhile, the draw for the U20 hurling championship has also taken place with Carlow set to play Laois on Wednesday 21 October at a venue to be confirmed. The winner will take on Galway in the quarter-finals a week later.