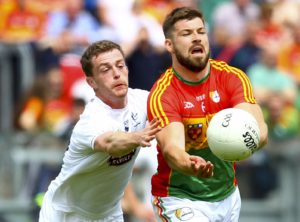 Daniel St Ledger in action for Carlow during the 2018 Leinster senior football championship quarter-final against Kildare in Tullamore
Photo: Inpho

By Kieran Murphy
AFTER 13 years as a member of the Carlow senior football panel, Daniel St Ledger has retired from intercounty football.
However, he is not going to be totally lost to football on Barrowside and will concentrate on helping Kildavin-Clonegal regain senior status and make amends for last year’s defeat in the intermediate championship final.
Following a stellar minor career where he played a key role in Carlow’s run to the 2007 provincial final, he made his senior debut in the league the following spring. He then made his Leinster championship debut against Meath in 2008.
While there were many disappointments, there were great days too and he was instrumental as Carlow finally won promotion from Division 4 of the national football league with a win over Antrim in Belfast on St Patrick’s weekend, 2018. There was also an unforgettable championship victory over Kildare in Tullamore the same year, but the Kildavin man says winning promotion was the highlight of his career.
“From a football point of view, [the highlight] would have to be Antrim in Corrigan Park when we won promotion. That was a special day. We had been going after that (winning promotion) and it was something we all talked about,” he says.
“The Kildare game in the Leinster quarter-final and the Monaghan game in the qualifiers were all great games, but what we really measured ourselves on was the league.
“Playing to the best of our ability and getting a result out of it pointed the way forward for us. It told us that when we are totally organised and totally prepared, this is what we can achieve.”
Now two years down the line, St Ledger says he felt the time was coming to make a decision.
“2019 never really got going for us. It wasn’t an unbelievable disaster. We had been on the cusp of staying up in Division 3, but we hadn’t prepared as well as the previous year and it didn’t happen for us which was frustrating.,” he said.
He picked up an injury in the first league game this year and with the Covid crisis putting a halt to all sports, he has had time to reflect.
“As a group, things weren’t going right either and we had regressed slightly. It didn’t feel as good as it had previously. I wasn’t getting the most out of myself personally and wasn’t enjoying the football side as a result.”
The decision is made now. There is a degree of sadness too, but it is not overbearing.
“It feels like a small bit of a weight of me. It was a fairly big decision. It was the longest relationship I ever had in my life. It has been part of my life for a huge period of time,” he says.
“I think it is better to let the young lads at it now. There have been ups and downs and I have made some of my best friends through intercounty football.”