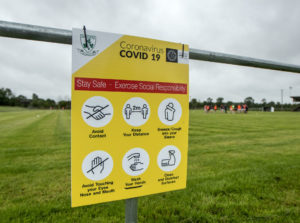 By John Foley
With the majority of GAA clubs returning to training at adult and juvenile level over the course of the last 10 days, club committees, players and parents have all been coming to terms with the new realities of sport during a pandemic.
Online learning modules, health questionnaires and temperature checks have very quickly become the norm but there also seems to be an acceptance that everyone has to do their bit to ensure that the training environment is a safe place.
Setanta Ceatharlach has a thriving juvenile section with a host of teams for boys and girls. Secretary Mary Bates says a few simple adjustments to their training schedules have made a big difference.
“It’s working out well, so far so good,” Mary says. “We’re introducing teams back over a three-week period and that’s helpful. We had three groups back last Tuesday, four groups on Friday and more groups coming back this week and next week.
“The other thing which has worked well is staggering the start times. Each group is 15 minutes apart which means we don’t have a cluster of people arriving at one time.”
The club operates out of the Presentation College grounds in Carlow town which makes it easy for parents to drop their children off in a safe fashion.
It has been a big exercise for both the GAA as a whole and individual clubs to make people aware of what they need to do before returning to training, but Mary says it has been working well.
“It’s a major communications exercise and initially that was the biggest challenge,” she says. “But the cooperation we have had from our parents, our coaches and our supervisors has been great. We haven’t had one issue and the feedback has been positive about how things are being done.
“Plus the cooperation from the children has been great. They are just doing everything that’s asked of them. Hopefully, as the weeks go on, everything will continue.”
It’s no surprise that the younger generation is delighted to have the opportunity to get back to some kind of normality.
“The kids are delighted to be back on the pitch again,” Mary says. “It was particularly noticeable with the under-14 and under-16 girls. That age group was thrilled to be back. I think the lockdown was very difficult for teenagers. They miss the company of their friends so they were delighted.”
Over in Tullow, St Patrick’s have returned to training at adult and minor level while St Anne’s ladies are also back on the pitch. The juveniles are set to come back in the coming days.
Mick O’Neill says the club has been taking it one step at a time and are happy with the results so far.
“We have a walking track which is open to the community and we didn’t open it up initially until we had the proper structures in place, but it’s going quite well,” Mick says.
At adult level, the players, with a little bit of encouragement, are completing their online modules and health questionnaires in order to return to training.
“I’ve had to turn away one or two until they had it done and that [message] filters down,” says Mick. “Everyone has come on board and it’s working fine at the moment.”
The club has ordered portable hand sanitisers which will be placed on the pitch making it more user friendly for the younger generation.
“If the kids see something different they will be more likely to go and use it regularly,” says Mick.
There is also an acceptance that some players and families will not be comfortable returning to the club so soon.
“From what I can gather, some families are apprehensive,” says Mick. “It depends on their circumstances. But we’re not pushing to say you have to come back. You come back if you want to and if you feel it’s safe to do so. If they have any issues, people are encouraged to bring it to the attention of the Covid officers and mentors.
“Young people are interested in getting active and meeting friends again but people should not be pushed into making a decision they’re not comfortable with.”
It’s a case of each club taking small steps as they slowly step out of the shadow of months of inactivity and back into the light.