By Daletta
‘MAY you live in interesting times.’ Oh, how we do! Fifty years ago the racing world was enthralled by one horse – Nijinsky. He came to the Curragh on Saturday, 27 June 1970 unbeaten in his eight career starts, with two legs of the English Triple Crown safely in the bag. He had been ridden to those two Classic triumphs by the incomparable Lester Piggott.
Renowned racing writer Richard Baerlein summarised the Irish Derby riding arrangements in his book devoted to Nijinsky’s racing career, published in 1971. ‘As Liam Ward said earlier, he only had a gentleman’s agreement with Vincent O’Brien to ride the latter’s horses in Ireland. With the approach of the Irish Derby the connections would naturally have liked Lester Piggott to have been associated with Nijinsky once again. Liam was asked whether he wanted to ride him or whether he would step off. Liam said he wanted to ride him and that was that. Vincent stood true to his gentleman’s agreement.’
‘Before the Irish Derby most critics had agreed that Nijinsky was the best Derby winner since the war, with the possible exception of Sea-Bird. He was still in the running to prove himself the horse of the century.
‘Meanwhile Liam Ward, having secured the ride in the Irish Sweeps Derby, rang up Vincent O’Brien to suggest he should ride the horse in an exercise gallop, as he had not been on him since the Gladness Stakes on April 4th. This was arranged but all Liam did was a quiet canter.’ 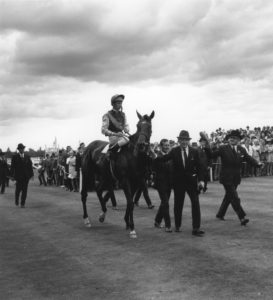 Nijinskey, ridden by Lester Piggot, being led to the enclosure by trainer Vincent O’Brien at Ascot in 1970 Photo: Inpho/Allsport

Richard Baerlein recorded Vincent O’Brien’s recollections of Irish Derby day. ‘All went well with the horse in the 24 days between Epsom and the Irish Sweeps Derby. The change in jockeys was not as much a matter of concern for me as it was for Liam Ward. He was the one who had the pressure really on, but Liam had the courage to ride a confident race on Nijinsky. I thought he rode him beautifully in the Irish Derby and whilst some people thought that room was purposely made for the horse to come through, Liam afterwards said there was room for two or three horses to do so. In fact, there was no necessity for anybody to do anything to help him out. There was plenty of room there and the horse was going so easily that he just snatched the opening without the slightest difficulty and went through and won, just going away as he leased. He was a very, very easy winner of the Irish Derby.’
Only two years previously Vincent O’Brien had won the Epsom Derby with Sir Ivor, ridden by Lester Piggott. On that occasion Vincent had likewise kept to his agreement with Liam Ward, who took the mount on the long odds-on Sir Ivor, only to be beaten by Ribero, ridden by one L Piggott.
Liam Ward gave his account of the race.
‘I must say the only thing that worried me that day was the fact that Nijinsky sweated up quite a bit before the race in the parade. Michael Kauntze, Mr O’Brien’s assistant, said to me “I wouldn’t worry; he was a bit like this at Epsom,” but I think he was just trying to give me a bit of encouragement. He got on his toes a lot, and I am sure he had run one race by the time we got to the stalls. From the moment we jumped out, however, I was never in any doubt that I was going to win.
‘I was never out of the half speed all the way on him. He did everything I asked him to do that day – which was just as well as everyone expected him to do it!’
Liam Ward and Nijinsky remained unbeaten in their six starts. In the light of what lay ahead Liam may perhaps have been a trifle tongue-in-cheek when saying, “Unfortunately that was my last ride on the horse.”
Nijinsky, reunited with Lester, went on to blow them away in the King George VI and Queen Elizabeth Stakes at Ascot. When interviewed Vincent O’Brien was emphatic. The St Leger was simply not on Nijinsky’s agenda. His objective was the Prix de l’Arc de Triomphe.
It’s history now. Owner Charles Engelhard determined that his champion would become the first Triple Crown hero since Bahram 35 years previously.
A troubled preparation, blighted by an attack of ringworm, saw Nijinsky become the last Triple Crown winner, 50 years ago. But at a frightful cost.