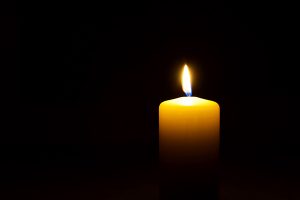 The death has occurred of Paddy Curry of London and formerly Clonagoose, Borris on 30 June. Sadly missed by his brothers, sisters, nephews, nieces, in-laws, relatives and friends.

Funeral to arrive at The Sacred Heart Church, Borris for Requiem Mass at 11.30 am on Sunday followed by burial in Kiltennell Cemetery. Due to Covid 19 restrictions and Goverment guidlines, people can enter the church yard while observing social distancing.

Funeral Mass can be viewed on www.borrisparish.ie webcam.

Mary Teresa Kelly (Maureen) was born on 8 June 1932 to Patrick and Brigid Mullins, and passed peacefully from this life on 8 July.

She was the second youngest of ten children, two of whom died in infancy. She grew up in Myshall with her five brothers: Tom, Paddy, Mick, Jim and Joe, and two sisters, Anna and Bridie. The family later moved to Dublin, where she finished school, and began her career as a bookkeeper at the Atlas Furniture company. She met the love of her life, Sean and they were married on September 7, 1955. One week later, they emigrated to New York, and remained there for nine years. They decided they would go back to Ireland for school and family reasons. This time, they traveled with three small children and twenty two pieces of luggage! They settled in Bray and she spent the next several years raising her children, and supporting Sean’s construction business. They became an integral part of the Bray community, and encouraged by family members already here, she moved out with Sean, to Santa Clara CA in Nov 1985. Tragedy struck in April 1986 when their son Sean Matthew was killed in an accident in Paris. Following this trauma, her wish was to return to Bray, and put down roots again. When Sean passed in 2007, she made up her mind to visit her grandchildren in California each summer and Christmas, and she made these frequent trips for the next seven years. She made more friends in CA who continued to communicate with her in Ireland, and stopped off to visit family in New York en route to her destination. Finally, in October 2015, she made the decision to move to California permanently. It was difficult to leave her home, and her friends, but she was excited to be near family. She lived independently in a senior community, made more friends, and when her health was declining in 2019, she moved to a care home, where she was happy and safe for the last year of her life.

She is remembered for her warm smile, her pleasant, gracious personality, and love of music and song. She loved to attend weekly mass and lunch with Liam, tea with Donna on Monday afternoons, and getting her hair done on Fridays with Noreen. She loved spending time with her family and friends; we will forever cherish the memories of Saturday evening BBQs at Killarney Farms swim center, birthday and holiday celebrations, and the annual 4 July party at Pat and Chuck’s!

Back in Bray, her many nieces and nephews remember the Sunday afternoon visits with Auntie Maureen. A cup of tea and a warm welcome was always waiting for anyone who stopped by!

She will be sadly missed by her heartbroken family: her son, Liam, daughter Noreen, son-in-law Ronan, and daughters-in-law, Donna and Marie Christine; dear sister Anna, brothers-in-law Donal and Eoin; sisters-in-law Maura, Kay and Margaret; and her many nieces and nephews in Ireland, New York, Canada, and California. She was beloved Nana Kelly to her six grandchildren: Aurelia, Aoife, Katie, Sean, Michael Jack, Eamonn; and her two great grandchildren: Ethan and Yoorick; and Darling Nana Mo to Sam and Jack.

She was the beloved wife of Sean, daughter of Patrick and Brigid, daughter-in-law of John and Annie Kelly all who have preceded her in death.

The family offers their sincere thanks and gratitude to the staff at Crescent Oaks, and Vitas, who provided her final care. They would like to offer a special thank you to the Walsh family for their unwavering support throughout the years, and in their help with her move to California, and beyond.

In lieu of flowers, the family requests that you please donate to the Alzheimer’s Association at ALZ.org.

The death has occurred of Mark Kelly, Coolkenno, Tullow on 13 July. Funeral arrangements to follow.

Funeral took place this morning (Wednesday) at the Church of The Most Holy Rosary, Tullow with burial afterwards in St Patrick’s Cemetery, Tullow.

Funeral Mass took place on Wednesday at 2.30pm in the Cathedral of the Assumption, Carlow. Burial afterwards in St Mary’s Cemetery.