O’Brien and donor give €80k to Tullow rugby club 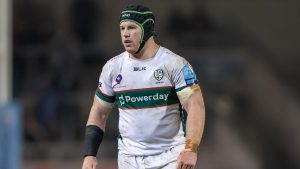 Sean O’Brien made his debut for London Irish against Sale Sharks in the Premiership in March Photo: Inpho/Roger Evans

THESE might be worrying times for sports clubs all over the country but both Carlow and Tullow rugby clubs are fighting hard to maintain and improve their playing facilities in anticipation of when rugby can start again.

Tullow RFC have continued with their plans to build an all-weather pitch while they are also going to resurface and realign their two grass pitches.

They have been helped hugely by the generosity of two people in particular. Sean O’Brien has moved on to pastures new at London Irish but he is never likely to forget his roots and he donated a huge sum of €30,000 to the club’s fundraising effort. There was also a whopping €50,000 donated by a second anonymous donor.

The full cost of their development project comes in at €650,000 and while they had Leader funding covering 70% of the cost, they still had to raise the balance themselves. They also opted to drive forward and renew their fundraising efforts.

“We have come up with about €100,000 ourselves and we are borrowing €80,000,” explained club president Paddy Browne. “We have some extra fundraisers in the year that is in it. We have a GoFundMe which is at €14,000 and we are also selling plaques. The plaques can have the donor’s name on them. We have sold 100 already at €100 each. These are 14 by 8 inches which will be attached to the fence around the all-weather pitch,”

Browne says there is still plenty of work ahead.

“We have bad news as well. It is very unlikely we will be having our golf classic this year which has been an important fundraiser. We anticipate that it will be more difficult to sell membership. We are starting that process now. We are having our AGM on 12 August in a venue which will allow us to social distance.

“We are concerned that with a slow start to rugby it will be harder to collect membership fees.

“We have a Park Run in Rathwood which we haven’t discussed yet but if Covid continues all this will be difficult. We have matches planned but if there is another surge then matches will be cancelled.

“We are lucky, in one sense, the fact we are dealing with such a big project it is giving us an extra focus. There is an awful lot of good will out there which, if we didn’t have, then I would be downhearted. It is keeping us on track and people have been very generous.”

Just over 10 miles away, Carlow were also faced with a fight or flight option. They chose the latter and have undertaken a massive clean-up project on the pitches and to the areas around the clubhouse. Their facilities are picture-postcard perfect now.

The club was desperately disappointed to lose out on the opportunity to host the Provincial Towns Cup final this year.

Chairman of Finance Ian Dwyer admits the club is being run on a shoe-string and says these are anxious times for all concerned.

“We have lost the Towns Cup final, we have had to cancel the golf classic. All the juvenile discos which we hosted once a month have been cancelled. Any income generating events in the club have all been suspended.

“We are running our finances on a week-to-week basis to see if we can get over the hump,” Dwyer says.

“We have utility bills. Gas and electricity bills are being paid. We are being selective of who we can pay in relation to creditors and that kind of thing. Obviously we are going to honour all our commitments but we are the same as any other business. Just at the moment we are trying to hold off on our creditors until income starts to come back again.”

The former Carlow centre, who was also capped for Leinster, says the club, who are in the initial stages of planning for their 150-year anniversary in 2023, is hanging in there. Despite the concerns, Dwyer is still looking to the future with optimism.

“Rugby could be the last one to go back and until we get a commitment we cannot budget. Even the gate receipts, which would be minimal, we don’t know when matches are going to start. Until matches start people are not going to the bar. It has a huge effect on the club but thankfully we don’t have the huge debt which some clubs have.

“We are surviving, keeping our heads above water and we are OK at the moment.”