Carlow’s Paul Cashin in his element in Croke Park 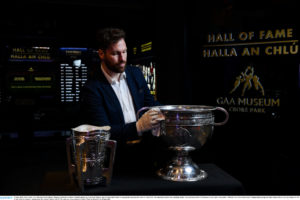 JUST the thought of Paul Cashin working in Croke Park has to make you smile. After all he is football mad and has steeped himself in a GAA tradition from an early age. He loves his football, he loves his sport.

The former Carlow and Éire Óg senior footballer was recently appointed Front of House Manager at Croke Park Museum. It’s put to him he is very much like the child who dreams he is living in a sweet shop before waking up to find his dream has come true.

“It is exactly as you put it. Charlie and the Chocolate Factory every day,” he agrees.

After working in Kilkenny, he moved to Dublin five years ago.

“My education background is not extensive. I never went on to get many degrees. Even at school and the Leaving Certificate, I wasn’t great,” he says. “In eBay I had experience managing in a busy environment. Making quick decisions on a day-to-day basis. After eBay I went on to another American company, DocuSign, an electronic signature company. I was getting plenty of experience,” he says.

Paul wasn’t unhappy where he was, but when he spotted a vacancy at the museum in Croke Park he applied for the position. When he was offered the job, it was a no-brainer. He grabbed the offer with both hands.

“In former jobs I used to go in and do my routine and go home. But now I kind of wake up energised every morning,” he says. “I’m delighted to be going in there. I am not meant to be in until nine or 10 o’clock in the morning when we open up. Now, I am usually in there at 7.30 in the morning. I just love going in early, beating the traffic with a nice 20-minute cycle from where I live.

“It doesn’t go away, the feeling of walking into Croke Park. People say you will get used to that, but you don’t. I have time then to go out pitch-side. I don’t get sick of it.”

“For many people, it is the first time to be visiting the stadium. You have kids as well who might be in Croke Park for the first time without crowds. The joy on their faces and the money shot when they walk onto the side of the pitch is something else. You never get bored of that.” 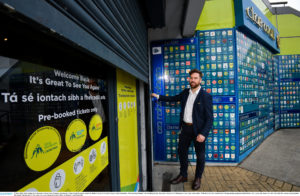 Cashins opens the shutters at one of Ireland’s largest visitor attractions.

If he thought his knowledge of the GAA was good, then he had to learn a lot more when he was appointed.

“I needed to learn about the history of GAA and the history of the stadium. It wasn’t hard for me as I was interested already in the GAA. When I had to study for a test when I was younger, I might not have been interested in it and wouldn’t remember it. It is a lot easier remembering something you are interested in.”

From under-12 up to under-21, Cashin has the full pack of underage medals with Éire Óg but he admits he had doubts about whether he would be good enough to make it at senior level. He says he lacked self-confidence. That seems incredible when you subsequently see how well he did with club and county.

“I was thinking, I will never break into the senior Éire Óg team,” he recalls.

Even his senior debut for Carlow was a strange one.

“There was a note put into the paper. Does anyone want to come to an open training match on Sunday morning? I answered the ad and secretly Tipperary were there. We only had 16 players and two of them were goalkeepers so they had to start me.”

He must have done something right because he kept two time All-Star Declan Browne scoreless that day. A 19-year-old Cashin had made an impression with the Carlow management team.

“Ever since then I was part of the Carlow team up to the age of 28. I did my cruciate about that time so, leaving out injuries, I did about 10 years with the senior team.”

“For me the highlight was beating Louth the year after they had controversially lost a Leinster final to Meath in 2010. No-one gave us a chance but we had a really good team. It was one of the best performances by a Carlow team that I was on.”

There were more highs than lows but he looks back on his intercounty career with pride.

He played against Laois the year after they won the provincial title (2003).

“I never saw such a crowd. Laois came to Carlow the year after they had won a Leinster final. We put up a great performance. That could have been a huge turning point for Carlow football if we had turned them over in the championship that year. I felt so devastated.”

Sport can be cruel. He was so proud to captain Carlow in a championship match in Croke Park but Meath hammered them that day. Despite those setbacks at headquarters, he still feels the likes of Carlow benefit from an open draw in Leinster. He insists the small counties should get a chance to take on the bigger teams.

“For me, the top 16 and the bottom 16 format for the championship might take away the magic for Carlow who live for big days.”

It is interesting he should say that. Does that mean that even though he is working in Croke Park he can articulate his views about decisions taken by his employers?

“I always maintain we should be allowed to have our opinion. I might not always agree with the things the GAA does, but ever since I started working in Croke Park I can understand some of the decisions.

“Being outside and looking in it is easy to criticise everything, but a huge amount of work goes into the GAA in the background. They don’t make decisions to try and make people unhappy. They are doing their best to keep the games going. So many are quick to criticise but they don’t know how much work goes into the background of these things. I didn’t know either until I got here.”

The arrival of the Covid-19 pandemic altered people’s lives. The museum had to close and has only opened again recently.

“It was a weird transition. It was before St Patrick’s Day when an announcement was made. We had no choice but to close up. That was it. It was very last minute. In a matter of hours we had to cancel tours, let everyone know. At first we thought this was maybe for only two to three weeks. We didn’t know the extent of this. We weren’t looking long term at the time. It quickly became apparent we would not be going back.”

Paul and some members of the staff were able to work from home.

“It must have been tough on the guides who were asked to go home. To be fair, the GAA were very good. No-one lost their jobs. “Everyone was being paid a certain amount. I cannot commend them enough. They were brilliant. It has been tough. When we opened up it was 100 days since it closed.”

Now Paul and the staff in the GAA Museum are adapting to life with the threat of Covid-19.

“Hand sanitisers are in place, signage, procedures are in place, Tours are in reduced numbers just so that we can facilitate social distancing. The guides had to go to three different training sessions in order that they would be qualified to come back.”

There is a steady flow of visitors to Croke Park.

“We are seeing a huge amount of families. That is not to say we are not seeing individuals either, but families are using it as a day out to come and do the tour,” says Paul.

The plus side means tour guides can now take more questions and give more time to their customers. There is an immediate intimacy built up between the guides and visitors which would have been harder to generate before Covid-19.

“It was always a good tour but you might not have had that personal feel. They would have the stadiums to themselves when they go out pitch-side. It is very personal and they can ask the tour guides more questions,” points out Paul, who says the pressure was on just before the museum reopened.

“We had to learn everything in relation to health and safety for Covid-19. There was a huge operation to get everything in place. We are delighted to be back.”

The nature of the GAA exhibition means that many of the people featured in the museum are alive and well.

“We get former players and current stars coming in all the time. I should know everyone but I don’t know some of the older people.

One of the greatest forwards of all time who was on the Offaly team of 1982 which deprived Kerry of five-in-a-row is prominent in the exhibition.

“We had Matt Connor recently. He is part of our Hall of Fame. You are kind of in awe when people like him come in. Brian Fenton (Dublin) was also here. He had his own family in. You get a lot of GAA players and they always interact with the customers.”

Cashin was thrilled when the Offaly player recognised him.

“You used to play wing-back for Carlow, didn’t you?” said Matt Connor to the Carlow man.

Not in the job a year, and with the Covid-19 crisis hanging over all their heads, Cashin is learning all the time. For anyone who has even the slightest interest in the history of the GAA it is a must visit.

“There are die-hard GAA people who keep coming back. That is lovely because you build up a rapport with them. They are doing the same tour over and over again but they love it,” says Paul.

“Then you have couples. We have sky line tours which is part of my remit. That is a great one particularly if you are not that often around Croke Park. You get to see the view from 17 storeys high. You get a history tour of Dublin City and the monuments as well. You have the view of the city and that is a rare one. Everyone should do that one. It is unbelievable.”

With a pep in his step, Paul skips around the reception area at the museum. His enthusiasm rubs off on staff and visitors alike. He may not be from Kilkenny, but the Carlow man is the cat with the cream as goes about his business in what is the Field of Dreams for GAA folk nationwide.