Frank McGarry was the driving force behind Palatine GAA Club 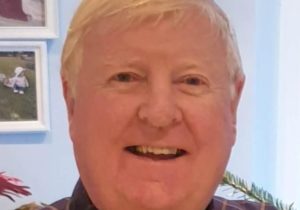 Born on 1 January 1943, Frank was one of six children of the late John and Annie (née Hughes) McGarry. He was predeceased by his brother Dermot, who was killed in a road traffic accident in 1955, and Brendan, who died in August 2011 and who worked with Frank in Hughes Monumental Sculptors.

The McGarry family originally lived in St Killian’s Crescent before moving to reside on Browneshill Road.

Educated by the Christian Brothers in Carlow at primary and secondary levels, Frank joined the Hughes business on leaving school. Monumental sculpting had been in the Hughes family for generations, their workplace initially being located at Green Lane, before moving to Tullow Street in 1884 and eventually to College Street in 1958.

Frank learned his trade from his Hughes uncles Paddy, Mick and Eamonn, who were dedicated GAA men. Frank himself went on to have a serious involvement with the GAA, serving as chairman of the Palatine club and holding that position with Cnoc Árda when they bridged a 54-year gap in 2006 by winning the Carlow senior football championship for the first time since 1952.

Frank met Kathleen Malone from Oak Park, Carlow on a blind date and they hit it off. Kathleen was training to be a nurse in London at the time and, when Cupid struck, Frank followed his heart and went to England, where they lived for just over a decade. Frank continued to work in the stone masonry business in London and the couple returned to Carlow to marry in the Cathedral of the Assumption on 29 August 1968.

They returned to Kent, where their first child Ann was born. And in 1978 they came home to live in Carlow. Their second child Edward (Eddie) was born while they resided in the McGarry family home at Browneshill. At that time, Frank and Kathleen were building their own home at Ballyburn Upper.

Frank was particularly proud of his vegetable garden in Ballyburn Upper, where every year he loved to plant potatoes and an assortment of vegetables, which he got great enjoyment from watching them grow and harvesting the crop with his grandchildren.

Frank was a great racing follower and the annual Cheltenham festival in March was the cornerstone of his racing year. Frank attended this year’s Cheltenham meeting, too, having holidayed earlier in the year in South Africa with wife Kathleen and his cousin Seamus Burke.

Palatine GAA Club paid a heartfelt online tribute to Frank McGarry and the huge volume of condolence messages on social media reflected the high esteem in which he was held. The GAA club’s tribute referred to the overwhelming sense of grief and loss palpable within the club and community with the passing of ‘our dear friend, Frank McGarry’.

It continued: ‘Frank was simply everything to us and his hard work and dedication to our club was immense over many years, as part of our executive committee since the 1990s to now and serving as chairman from 2004 to 2012.

‘As chairman, Frank oversaw momentous developments for Palatine GAA Club, both on and off the field. He was the driving force behind the upgrading of our pitch, his Theatre of Dreams, walking track, dressing rooms and gym complex in 2009. This was a massive undertaking, but Frank approached it in his calm, understated manner, securing generous financial backing from our loyal sponsors, Dan Morrissey Ltd, while rallying the whole club behind the project.

‘His personality and approach had everyone only too willing to help and his leadership by consensus just got the job done. Palatine had tremendous success on the field of play, too, winning a first senior championship in 54 years in 2006 and securing two county minor football titles in a row in 2008 and 2009 ‒ unprecedented success for our club. None of this would have happened without Frank McGarry’s outstanding guidance and direction.’

The tribute went to say that Frank took great pride in the club’s successes throughout the years and it was a joy to see his beaming smile when trophies were brought back to the clubhouse after the latest triumph.

He also served as Pal’s county board delegate, gaining the respect of all on the board and beyond for his valuable input to the county.

‘He was a fantastic fundraiser and financial supporter, ever-present at our lotto draw every Monday evening and first to volunteer when help was needed on other fundraising projects.’

Frank was the most mild-mannered of men and brought calm and composure to every situation. He never lost his temper in sometimes volatile situations over the years and his wise counsel always helped to move the club forward. That was always Frank’s motto; club came before personalities.

‘His devotion and pride in his family was evident at all times, too. He doted on his beloved wife Kathleen and was so proud of Eddie’s and Ann’s achievements in life.

‘His passing leaves a void that’s impossible to fill, but we will take inspiration from his memory and example.’

The tribute concluded: ‘Palatine GAA Club would not be where we are today without the work and leadership of Frank McGarry. He was a unique, special man and our club will not be the same without him. We have lost a local hero.’

Frank reposed at his home before removal to the Cathedral of the Assumption, opposite Hughes Monumental Sculptors, with Fr Tom Little, PP, Askea-Bennekerry-Tinryland, a family friend, celebrating his funeral Mass.

Readings at Mass were by Katie Harris (granddaughter) and Ann Harris (daughter), while granddaughters Rebecca and Ruby undertook the reading of the Prayers of the Faithful.

The singing of hymns was by Clara Hutchinson, who also played piano.

Members of Palatine GAA Club formed a guard of honour from the cathedral on Frank’s final journey to St Mary’s Cemetery, where he was laid to rest with his parents and brother Dermot, with Fr Little reciting the final prayers at the graveside.