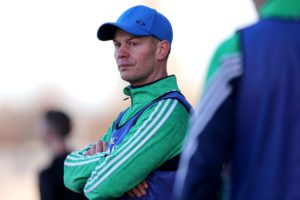 THE restrictions and protocols on how to approach a pitch will be strictly adhered to when reigning champions, St Mullins, take on Naomh Eoin on Friday next at 7.30pm in Netwatch Cullen Park in the first round of the senior hurling championship.

They are a pain for everyone involved but they are a necessity. The dressing rooms in the stadium will also be locked and it looks as if the two teams will take to the pitch from opposite ends of the ground to each other.

“Only yesterday we were told there will be no dressing rooms at all,” Niall O’Donnell, the St Mullins manager, said last week. And this is where O’Donnell sees the funny side.

“I remember myself when I was playing togging off by the side of the pitch but none of these boys did it,” he jokes but then quickly reverts to type when he points out that, no matter where they get changed, it will be all about his side trying to retain their title.

They are in a completely different situation this year where hurling doesn’t clash with the football championships. St Mullins are also listed to play three games in 11 days.

“Everyone is looking forward to the championship kicking off. It is new with the structure being condensed. Last year there was two to three weeks between matches. They don’t have that luxury this year.”

“Three matches very quickly,” O’Donnell repeats. Even at this stage he is wondering how that will affect a squad which is small enough anyway.

“That could pose problems but isn’t it better to be playing matches than not having any matches at all,” he asks while revealing his squad will not be exceeding a panel of 24 and will probably be two less than that.

“We only have 22. We won’t be leaving anyone off our panel. Paudie Kehoe is quarantining and won’t be available at the start. Our panel is small and won’t have fellas to come in.”

There are stories emerging of clubs having to close their gates once more after players tested obvious for the Covid virus. That is the fear everyone has. It would be so disappointing to have started training, played a few challenge matches and then a player gets sick. From a situation where the club is all embracing there is now a situation where members are asked not to come training if they feel unwell.

“We are always reminding the lads that if there is any issue at all don’t come near the place at all. That obligation is on us all. We are doing the best we can. All clubs are complying and we are rolling with the changes.

“If someone does get it we are all hanging on a cliff and everything stalls. We can only answer for our own side and doing all we can to comply.”

Putting all those worries aside the St Mullins manager is expecting a tight championship. They may be reigning champions but that win was back in 2019. It is history now.

“There is nothing between the teams. When it comes down to it and when the form isn’t there or you are down a percentage on a given day you will be found out. There is nobody in our club thinking we are above or better than anyone. We are grounded. We know if we don’t perform any of the other four teams will beat us.

“Like last year, there will be twists and turns along the way. We are certainly expecting a big challenge. We will give it our best shot and I am sure all the other teams will be giving it their best shot. It could be a hop of a ball on a given night can change things,” says O’Donnell.

Then he speaks for everyone. It might be the only thing the five teams in this year’s senior hurling championship agree on.

“Our main hope is that it does start and that there is a conclusion. That is the most important thing at the moment,” O’Donnell says.