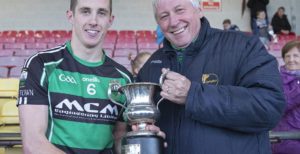 Teams will be looking to repeat the scenes of last year’s final when Bagenalstown Gaels defeated Mt Leinster Rangers in the final. Captain Alan Corcoran was presented with the cup by George Darcy (Bagenalstown Gaels chairman)

Key Players: Conor Lawler and Cian Clancy have contributed handsomely over the years and are poised to do so again this time while Paul McElligott is also available.

If they were a soccer team across the water? They are very much like the Derby’s, Coventry’s, QPR’s of this world who were once always good for picking up the odd trophy but the odds are stacked against them at the moment.

Verdict: They could lose out on a place in the knock-out stages.

Key Players: Aaron Amond did well with the Carlow senior hurlers when he was brought into the squad this year. Last year’s intermediate B winners will expect and most certainly get big games from among others Fiach O’Toole, Ayrton Gleeson and Eanna Holland.

If they were a soccer team across the water? Leeds United. Their best years seem to be in the past but there is an element of a sleeping giant to them as well.

Note: Mt Leinster, St Mullins and Naomh Eoin are fielding teams in the SHC so are not profiled