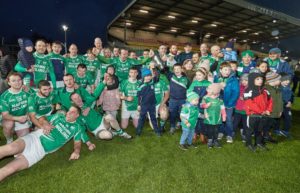 If they were a soccer team across the water? Newcastle have always had quality players but the ability to win silverware just seems to escape them. Burren Rangers are a bit the same.

Verdict: Naomh Eoin and Ballinkillen look to be the teams to beat in their group but if Burren Rangers could overcome even one of these sides and not slip up against Carlow Town and St Patrick’s then they could make the semi-final.

Key Players: The club are looking to Eoghan Cleary, Denis Kelly and Wexford native, Dillon Kenny, to have big seasons.

If they were a soccer team across the water? There are teams who soldier on year in, year out and are aware they need results and breaks to go their way if they are to rock the big boys. Southampton and St Patrick’s could empathise with each other on that score.

Verdict: Last year the Tullow club were edged out by Naomh Eoin in a group game. If they could reproduce the form they showed that evening, they are in with a chance of making the semi-finals in a group with five teams. It is still a tough ask.

If they were a soccer team across the water? Historically, Sunderland are up and down through the respective divisions. Palatine would know a bit about this too having previously competed at intermediate level.

Verdict: Football is number one in the club but with no clash this year because of the Covid crisis they are well capable of securing a semi-final slot at the expense of Bagenalstown Gaels and Naomh Bríd.