No weight too great for Power 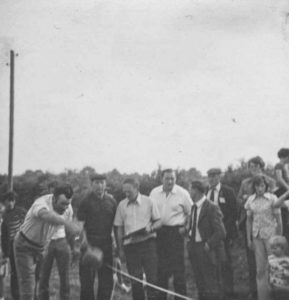 TOM Power of Ballyloughan, who was a member of Ballinree Athletic Club until it folded in May 1993, has a unique record in Carlow athletics and one that is unlikely to be ever surpassed nationally.

Tom has won 37 Carlow County Championship titles in the shot putt, 15 discus championships and five in the javelin.

He started his shot putt winning career in 1965, having taken part in his first championship in 1963 when he finished 2nd to the Carlow champion, Jim Bolger from Ballyhackett AC.

Tom Power’s fascination with athletics and the shot putt in particular, started when he attended Ballinree AC as a child. While he ran and also competed in the long jump as a juvenile, his real interest lay in the weight throw events.

Tom followed a long history and proud tradition of weight throwing that was part of the great attraction of country sports like Ballinree in rural Ireland from the 1800s up to the 1970s. Many a great champion entered the realm of folklore. A great example of this was in the celebrated book ***Knocknagow*** where the local hero Matt the Trasher threw the hammer ‘for the sake of the little house’ to beat the Captain from the big House.

Many of those throwers who emigrated to the USA down through the years excelled and went on to Olympic status in boxing, wrestling and weight throwing. 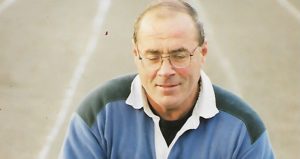 Tom, a very understated individual, also has four Leinster titles at shot putt, three of which were indoor championships, and finished 4th on three occasions in the national championships, He has over 300 medals, trophies and awards as a result of his dedication to his sport.

They range from Carlow championship medals to Leinster and national medals at Masters level.

He was also the holder of Northern Ireland championship medals. Tom has also trained with many of the top throwers of the period including Phil Conway, Dublin, who represented Ireland in the 1972 Munich Olympics.

Tom pays tribute to Pat Maher, Kellys of Coon and Morans of Muckalee with whom he regularly trained. Besides training partners, Tom mentions Pat Whelan and Pat Kelly, both of St Abban’s AC, who regularly helped out in running the sports in Ballinree.

When researching this article, I was lucky enough to get a copy of the programme of the Golden Jubilee Ballinree Sports which took place on 9 August 1953. Included in the programme were details of the original event in 1903. It listed the members of the original committee and results of the various events. Also included in the 1953 Sports programme was a review and a look back on athletics in Carlow over the previous 50 years (1953 to 1900/1890’s).

It also referred to a great annual sports day that was held in Borris in what was called the ‘Sports Field’.

The champion weight thrower of that time was a man called Mick Lawlor of Knockmore, nicknamed the ‘The Giant’. His son John later won fame as a weight thrower in the USA.

The programme refers to the top local weight throwers of the day (1953) listing Jack Fox of Fenagh, who was then retiring as the next best to the O’Neill brothers of Myshall. Other local weight throwers listed in the Jubilee review were: Frank O’Hara, Drumphea who was an active competitor in the 1920’s; John Shaughnessy, Ballaghmore; and Pat Kelly of Drummond who along with Fox, were members of Ballinree Club.

The O’Neill brothers of Coolnasheeguan, Myshall they were the most famous pair of brothers in the field of weight throwing competitions. Andy for length and Paddy for height. They reigned supreme down through the 1920s. Their feats with 56lbs have not been equalled anywhere.

Also mentioned under a section on famous brothers in the Jubliee Sports programme are JJ and PA Browne of Downings, Tullow who were a very consistent pair of all-round sportsmen claiming a large share of prizes in their time. JJ Browne served as a long-time chairman of Carlow County Board of athletics and was a respected steward and official at both Ballinree Sports and Carlow Co Championship fixtures down through the years.

Another local weight thrower and member of Ballinree Club was Seamus Kearney, Kylmaglush, who enjoyed success as a thrower, and was a regular competitor and official at Ballinree Sports and Carlow County Championships also.

Tom Power has a remarkable scrapbook collection of details of Ballinree Sports, Carlow County Championships and on athletics in general. He can recall events and athletes of his own time and of the past quite easily. Tom speaks highly of throwers who competed during the 1960s and 1970s including Derry and Fred Moody, Tullow who were members of Ballyhackett AC. The Moodys won Carlow and Leinster titles. John Mahon, Bunclody and Nicksy Comerford of Coon were other notable weight throwers.

Tom Power won his first shot putt title in 1965 and, at the back end of a remarkable career, won his last when he was 65 years old.

He showed me a report on the 1947 Sports which included a tug-‘o-war competition, which was a very popular sport during that time and had many and famous teams around the country.

Results of the day note the victory of the Boodurragh team pulling Dranagh from St Mullins, to win the event. Tug-‘o-war A War was on the Ballinree Sports programme again in the 1950, when Boodurragh beat The Curragh, who were the All-Army Champions at the time.

Tom joined St Laurence O Toole’s AC Carlow after his long service to Ballinree AC and took part with the club in the National Athletics League, a team event covering all the disciplines in track and field.

In conclusion, as a member of the former Ballinree Athletic Club, Tom Power was one of the outstanding athletes of his time.