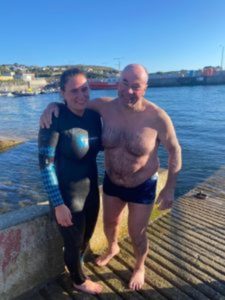 Castledermot native Steve Redmond, who became the first person to swim from Baltimore Harbour around the Fastnet Rock and back with his daughter Sadbh

A CASTLEDERMOT native has become the first person to complete a 42km round swim from Baltimore Harbour, around the Fastnet Rock and back into the harbour again.

Steve is a man of many records. Eight year ago he became the first person ever to complete the Ocean Seven’s Challenge, which is the equivalent of climbing the seven highest mountains around the world.

He has spent the last four years training to complete this swim around the Fasnet Rock, which is described as the ‘teardrop’ of Ireland. One of Steve’s main training areas is found just outside Skibbereen.

Lough Hyne, a saltwater lake, one of few in Ireland, is an ideal location for long distance swimming as the water combines with fresh cold water from the hills surrounding the lake and the saltwater coming in from the rapids.

This particular swim was probed with problems like running currents and tides, killer jellyfish and 10-degree water. “The water outside Baltimore Harbour becomes very cold; everything comes down to how well the swim is planned with tides and weather,” he said.

“Monday was one of the most perfect days I have seen in West Cork for a while. Everything fell right during the swim. The skipper and my support team kept me going all day, I just knew I wouldn’t be allowed to get back on to the boat until the swim was finished,” he added.

Steve began his career in swimming during his Triathlon seasons, but when injuries hampered this, he began swimming for longer distances. He has always enjoyed swimming but as he says: “Obsession is a funny thing, once I get an idea into my head about a swim I always follow through”. In a small pocket in his swimming shorts he carries a small rosary bead given to him by the much-loved parish priest from Lisheen, Father Cahill, which Steve believes keeps him safe on the swims.

Open water swimming has become a major sport in West Cork due to the fantastic water around there. Steve is a member of the Irish Long-Distance Swimming Association which is trying to promote new swims around the country.

This was the first time the 40km swim has been completed to date, being compared to channel swims like the English Channel. What makes long swims more difficult is the fact you can’t put your hand on the boat at any stage of the swim. Food and snacks are given every 50 minutes and are thrown out to the swimmer as they thread water.

There has already been huge inquiries from other swimmers around the world looking to complete the same swim as Steve did. Noel Browne, one of Steve’s support team, and friend said: “Any publicity these swims can get the better, we want more swimmers to come down and try the Fasnet Swims”

After a glittering career as a long-distance swimmer it is hard to know what’s next for Steve. “It’s hard to know where to go from here, my wife has already told me that’s the end of the long swims, but I might find another challenge yet,” he added.