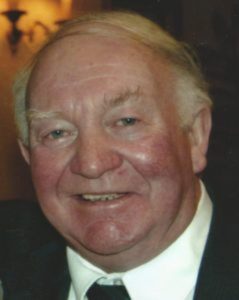 The late Mickey ‘The Lump’ Byrne

On Saturday evening 25 July  Castledermot  had their second ever broadcast of “Local Sports Live.”  The agenda was packed but the main theme was a tribute to the late, great Mickey “The Lump” Byrne. The show included – Tribute to Micky from Castledermot GAA Chairperson Dan O’Keefe, clips from an interview recorded by the GAA in 2011 between ‘The Lump’, Jimmy and Roseanna Curran in Jimmy and Roseanna’s house, while Paddy Byrne was live from Athgarvan to bring the latest scores on Athgarvan v Grangenolvin in the SFL Div 4.
And  John Kissane (Fuzzy) had a match report from Castledermot’s draw with Raheens on Thursday Night in the SFL Div 1, including the thoughts of manager Damien Hendy,recorded after the final whistle.
Thomas O’Connell finally moved from the producer’s chair to make his debut on camera with a roundup of action and upcoming fixtures from Grange GAA, Castledermot GAA and a quick look ahead to the KDFL season that kicks off next weekend including Moone Celtic and Castle Villa.
Thanks was expressed to Leo who was there for the whole show keeping the music going.
Congratulations to Dan and Thomas making their debut on Radio Castledermot.

South-east hospital under pressure with Covid-19 and superbug outbreaks