Margaret lived life to the full 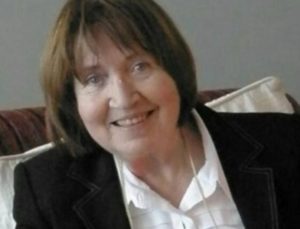 MARGARET Geoghegan, formerly King, wife of the late Seán Geoghegan, passed away peacefully on Tuesday 30 June in the Sacred Heart Hospital, Carlow after a long illness.

Her remains left her home in New Oak Estate, Carlow on Thursday 2 July for her funeral Mass in the Cathedral of the Assumption, at which Fr Ruairi Ó Domhnaill, Adm, Carlow presided.

Margaret is mourned by her children Ned (California), Helen (London), Seán (Leighlinbridge), Siobhán (Australia), Bernadette, Ann-Marie and Kathy (Carlow); her grandchildren Dean, Leon, Aaron, Shannon, Peter, Ned, Alison, Patrick, Aoife, Ava, Jack and Molly. She is also survived by her brothers and sisters Michael and Mary (London), Willy (Dublin), Yvonne (Italy) and Bernadette (Carlow), by her uncle Reg, with whom she spent many long summers in Milford as a child, and by her daughters-in-law and sons-in-law.

In a eulogy during her funeral Mass, son Seán spoke of the extension of family to include his mother’s carers, neighbours and all in the Sacred Heart Hospital, who eased her suffering and kept her spirits vibrant.

Margaret was known for her wisdom and deep compassion. She was a keen traveller, who also loved home and every detail of family life.

She brought majesty to the mundane and lived fully the gift of human life.

As a child, Margaret spent two years in Peamount Sanitorium in Dublin suffering from tuberculosis. She was not expected to live. But she came through and, despite being small of stature unlike her tall siblings, this early life experience not only made her stronger but gave her a ferocious empathy and zeal for life.

From a young age she worked as a nanny in Carlow and later in London, where she learned to ice skate; her skates held pride of place under her bed for many years.

She brought a powerful presence to her job in the Sacred Heart Home in Barrack Street – she felt it a privilege to stay with lone parents to their end.

Margaret had a refined intellect and contributed greatly to the local co-counselling network. She possessed a great sense of fun and mischief and found humour in the most challenging situations. Margaret enjoyed opera and had a great love of language, which she passed down to her children. Unbound by borders, as a mother she encouraged her children to make the world their home.

In her final years, Margaret loved to sit in her porch listening to the radio, taking great delight in the comings and goings of her neighbours.

Sadie Callinan was devoted to her family and a good neighbour