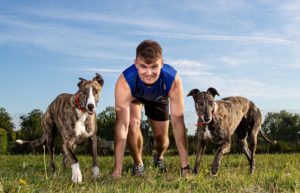 Memorable sporting moments: Without a doubt winning a Bronze Medal in the 200m at the World University Games in 2019. Winning a medal at a major championships is extremely difficult. I’ve had close calls and disappointments in the past so this was super. To have my team mates, parents, girlfriend and some friends all there on the day was amazing. When I arrived back in Ireland I had a lovely welcome home at the airport.

Running my PB (20.40) at the Cork City Sports and coming second in an outstanding field. There was a special atmosphere there that night.

Biggest influence on career: My parents have been a huge support right throughout and still are. They’ve guided me and helped me make decisions about my sport.

I have worked with some great support staff in the Irish Institute of Sport and IT Carlow who have all helped me along the way and steered me in the right direction.

Sporting Hero: Paul Hession and Derval O’Rourke were athletes I always admired. Paul holds the Irish record over 200m (20.30). He was world class and just missed a spot in an Olympic 200m final. There are so many top performing sports people from many different sports that I appreciate and admire.

Most difficult opponent: There are too many to mention! Competing on the circuit in Europe I come up against world class athletes all the time. The 200m is a hot event right now around the world and there are a lot of good guys running super-fast. From this, I have developed a number of different close rivalries nationally and internationally. One guy might beat me one week but I know I’ll meet him again somewhere else down the line for another tussle and vice versa! Two that come to mind are Paulo Andre Camilo and Ramil Guliyev.

If I could turn back the clock: I would like to approach and compete in the 2018 European Championships held in the Olympic Stadium in Berlin again. I was running really well that particular season. There are probably a few small things I would have done differently in the lead up the event. Major championships are a different ball game than racing on the circuit. You’ve got to produce your ‘A game’ on the day and be fully focused on qualifying from round one before looking any further.

Your favourite holiday: Albufeira with my girlfriend Muireann.

Memories outside sport: Looking back I suppose I had a great time in school and college and have met some great people and made some good friends along the way. It was great to leave the IT Carlow with a Master’s Degree. I have many great memories from our family holidays in Castlegregory, Kerry. I love getting down there whenever I can and it’s always a great holiday.

Favourite bar/restaurant: I like going to the Weeping Thaiger.

Three people you would bring to dinner (not family): Usian Bolt, Jim Gavin and Mark Furey.

What would be heaven for you: Winning an Olympic gold medal.