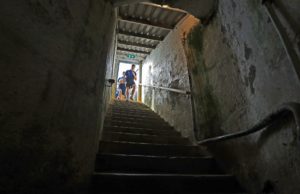 The tunnel in Netwatch Cullen Park is one of a kind in Ireland
Photo: INPHO/Donall Farmer

FIRST things first. Following on from a recent article is now akin to some of the cold case TV shows.

The piece was about the 1960 miracle gate opening which saw 4,000 fans bye-pass the turnstiles at Dr Cullen Park was published on 12 July.

Fresh information has come to hand from a very trust worthy source and it seems that the miracle hands was that of a Myshall man who lived high up on the hill. This man, his son and two friends decided they were going to the match Carlow v Down in Dr Cullen Park on 14 August 1960.

It must be stressed Carlow hurlers were a massive attraction at that time, enjoying a fine vein of form much to the delight of jubilant supporters around the county and Carlow people everywhere.

The man and his son had a blue van and they were carrying the other two people, all arrangements were made mid-week. The father and son was what you could say ‘tight’ with money. To illustrate the point, they were on their way to the game on the Sunday and approaching Myshall at the entrance to the Naomh Eoin GAA club. The van ran out of petrol and the son who was driving said crossly to the father.

“I taught I told you to put petrol in the van”.

The reply back was: “ By damn but I did, I put in a milk bottle full.”

So they pushed the car to the petrol pumps and soon they were on their way again —we can’t say who paid for the petrol this time.

As we said last week with the national anthem being played and the roar of the crowd inside it was driving the waiting crowd outside frantic and our four amigos were outside also.

The father always found a solution, right or wrong, to the problem. Lo and behold if it wasn’t the same fathers hands that performed the ‘miracle’ as the doors divided. Mesmerised with what he was after doing he quickly gathered his wits. The next thing to torment him was the fear of being caught so without his mates he made a beeline for the far end of the ground in and out through the crowd with his head down. He needn’t have worried with the game on and all eyes were on the action no one noticed the culprit

On the way home once he was in the van and out of Carlow Town, the father was like a brave hero of old, but also the fear would he be caught tomorrow was at the back of his mind.

Did it ever dawn on the father if he had been caught would he have paid back the four thousand two shilling pieces equal to four hundred pounds. However a happy father summed it all up on the way home, “By damn, but of all the bad things that has happened to me that was one best things.”

One other person got in touch to say he was one of the people ushered in through the door that day.

“It was one time we knew something was happening we were being pushed like hell and the minute everyone got in they scattered like hell to all parts of the ground. Not alone did I see a great match but I had another two bob as well as the one I saved. That’s all I had, and I had a great night’s dancing and was able to buy two minerals. It was definitely one of the great days and nights, memories wow”

This Tuesday those memories it is a month short of sixty years.

Ever stop to think when going to the terraced side of Dr Cullen Park and see teams coming out on to the field in the famed ‘Tunnel’. The tunnel was built in 1954 by Dan Carbery & Co Carlow and to say the least was controversial at the time. It cost five hundred pounds to build and it is fair to say it has stood the test of time. The tunnel is a metre wide and over two metres high. From the dressing rooms there is a concrete stairs descending 14 steps and level footage for a distance of 20 metres and 14 steps ascending the top which is at field level. In the 65 years it is in use it has seen great players and teams both at club and county level come through that tunnel.

Carlow is the only county in Ireland with an underground tunnel in use. In the beginning when players came up the steps they ran straight on to the hallowed ground. In recent years that has changed slightly.

It holds great memories for so many men, women and children. I have seen players taste victory at an early age and carry the silverware back to the dressing room through the tunnel.

I have also seen so many players and teams come through the ranks. They have been so close to the Holy Grail and yet never tasted and after years of hard work and dedication go down that tunnel for the last time.

It would be staggering if the number of people who used the tunnel in that 66 year period could be counted. As stated at the beginning when built it was controversial, and fears of schmozzles and disorder in the tunnel were unfounded. All counties in Ireland as well as cross water counties have travelled through the tunnel at one time or another. The tunnel holds one great joy for the first time a young under ten or twelve boy or girl comes running through that tunnel on to the green sward of Dr Cullen Park. No money can buy that feeling as they live their dreams.