SHC – Ballinkillen claim the points but need to improve 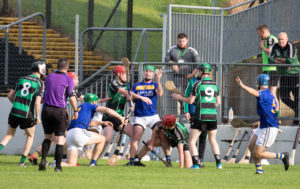 Players from Bagenalstown Gaels and Ballinkillen’s battle for the sliotar. Photo: michaelorourkephotography.ie

BOTH these sides would have gone into this first round senior hurling championship game on Saturday in Netwatch Cullen Park with something to prove to themselves. Having made a return to the top division the Bagenalstown side were looking for signs that they were ready to compete at the top level. On the other hand Ballinkillen are comfortable where they are at the moment but they are looking to raise the bar.

They were desperately unlucky to lose to St Mullins last season in the semi-final and look what the Carlow champions did in Leinster afterwards.

When referee, Paud O’Dwyer, blew the final whistle it is debatable whether either side would be happy with how they did. Ballinkillen set the platform early with four points without reply as Ciaran Whelan converted two frees and Sean Murphy and Ruairi Dunbar also raised white flags.

The only goal of the game was a messy affair with Owen Roberts punishing errors and a less than hard tackling defence on ten minutes. Dunbar added his second point and Bagenalstown Gaels, 1-5 to 0-0 in arrears, faced a mauling. Five converted Craig Doyle frees breathed life into the Bagenalstown side but he was guilty of missing five more in the half. Perhaps that is being unfair to him as he was by far Bagenalstown’s only threat up front. By the end of the game only a late Eoin Minchin point ensured Doyle would not be the Gaels only scorer.

By the 25th minute the Ballinkillen lead was down to four points but three frees by Whelan stretched that out to 1-9 to 0-5 by half-time. 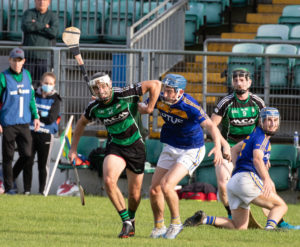 There was only going to be one winner from there. Back in the senior championship the Bagenalstown first touch had to be better. Time and time again they lost precious seconds when the ball should have been scooped up quickly and dealt with from there. They had other issues too but a dodgy first touch was their biggest problem.

If there is more in this Ballinkillen side they didn’t show it on the night. Perhaps that suits them. Again they were pegged back in the second half. When the lead was reduced to four points on 37 minutes they did manage to lift their game and dealt with what could have been a potential crisis.

Not for the first time, the Carlow county hurling team were given a close-up view of Sean Murphy and what they have been missing because of his commitment to the Carlow footballers.

He used his strength on the right at the tunnel end to make space and fire over a great point. He did something similar on the left later on. Those kind of interventions break opponent hearts and lift colleagues. Yet the final quarter was all about Ballinkillen holding on to what they had while the opposition kept looking for something to bring into the next game. It only gets harder for both now. Ballinkillen take on St Mullins next weekend and the senior newcomers have a break that weekend before they take on the reigning champions in a third round mid-week fixture.