Return to action goes off without a hitch 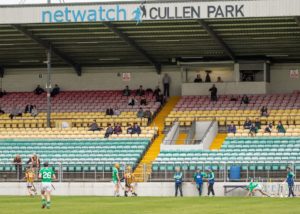 CARLOW GAA hosted its first round of hurling championship games over the weekend. In line with government guide lines crowds were limited to a maximum of 200.

Nevertheless, the organisers were happy to report everything went off without a hitch and fears were not realised that stewards might have to face difficult situations by not allowing in punters without tickets.

Sean Campion, the county board chairman, sympathised with those club members who have supported their club through thick and thin and are regular attendees at grounds around the county but who cannot get in at the moment.

“Obviously we wouldn’t be happy only 200 people are coming in and that includes teams, stewards, media people and all that kind of thing. We would like to have had bigger numbers,” says Campion who is frustrated that Netwatch Cullen Park could easily take far bigger crowds but cannot do so under the current restrictions.

“The clubs have been very co-operative. Everyone has been co-operative to get us up and going. Everything is being done correctly.

Hopefully numbers will be allowed to increase shortly. They need to,” added the chairman.

The Carlow County Board are planning to stream the latter stages of the championships. For the moment clubs have been afforded the facilities to stream the first three rounds of games themselves. Both Erin’s Own and St Mullins did this over the weekend.

“We are in talks with a company who are coming in to stream matches for round four. They are making sure everything is done correctly,” assured Campion.

“I haven’t seen any of the streamed matches yet but I believe they are very good. These people specialise in this and we are looking forward to have the facility in place.”

Meanwhile the chairman says he is nearer to be being in a position to make an announcement as to who will be the next Carlow senior football manager.

“No news yet. Hopefully, in the next few weeks, we will have this completed and we will be able to sit down and make a recommendation

Another big rise in Carlow cases

Could Carlow go into lockdown?